Joe Hinrichs was named Ford Motor Co.'s president of the Americas one year ago, after a three-year stint as head of Ford's Asian operations. Here's what Hinrichs told The Associated Press on the sidelines of the Los Angeles Auto Show this week: 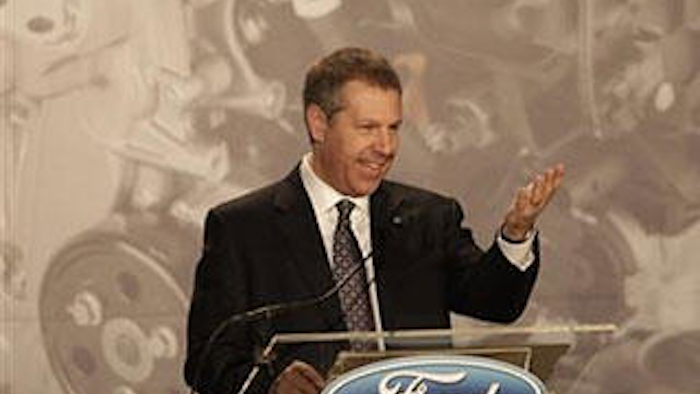 LOS ANGELES (AP) -- Joe Hinrichs was named Ford Motor Co.'s president of the Americas one year ago, after a three-year stint as head of Ford's Asian operations.

It was a bumpy start. Quality issues delayed sales of the new Lincoln MKZ sedan last spring. Then, over the summer, the government cut its fuel mileage estimates for Ford's C-Max hybrid. Ford had to send checks to unhappy owners who had complained that the C-Max wasn't meeting its advertised numbers.

Ford has celebrated some successes. U.S. sales rose 12 percent through October, outpacing the industry. The Ford's F-Series pickup truck has retained its commanding lead in the market despite newer competition from General Motors and Chrysler. This month, F-Series sales passed the total number sold in all of 2012, and should post the best annual total since 2006. Sales of Ford's Fusion sedan and Escape SUV have also been strong.

Here's what Hinrichs told The Associated Press on the sidelines of the Los Angeles Auto Show this week:

Q: You've been in this job for a year now. What have you learned about this market? How does this challenge compare to the challenge of running Asia?

Hinrichs: I think when you talk about the North America market, especially the United States, we continue to see an exciting opportunity for market growth for Ford. We've gained more market share this year than any other automaker. We've had record profits through the first three quarters of the year. So the key for North America is continuing the positive momentum. Asia-Pacific, especially China, has tremendous growth opportunities — beyond compare around the world. But also, it's the same thing: Great product launches lead to great market share gains lead to profitable growth. So I think at the high level it's similar, but of course the markets are very different.

Q: What do you think U.S. auto sales will look like in the coming year? Have consumers recovered faster than you expected?

Hinrichs: Consumers have recovered faster than I think anyone expected if you go back to 2008 or 2009. If you look at the last three calendar years, based on where we project 2013 — so '11, '12 and '13 — the U.S. industry will gain over a million units of sales each successive year over the previous year. The consumer has been very resilient. A lot of that has to do with the average age of the car portfolio. At 11.4 years, it's the oldest it's ever been, so replacement demand is a big part of it. I think we'll continue to see growth in the industry in the years ahead, but at a slower pace, which I think will be healthy for the industry. We see next year the GDP growth in the U.S. economy being about 2.5 percent, and over time as replacement demand, while still important, diminishes, the economy is going to have to push the growth. And that's not just happening at the degree it would need to to push the industry a lot further ahead.

Q: Does the U.S. have the manufacturing capacity it needs to keep up with growing demand? If we don't want to open new plants, do we need to make the current ones even more flexible?

Hinrichs: Our focus has been on not adding additional brick and mortar, but focusing on getting more out of the current plants. Increased line rates, tag relief (when workers take breaks one at a time) in lieu of mass relief, more flexibility in the body shops, adding shifts in some cases. And that will be our strategy for the foreseeable future. We want to make sure that we maintain a low fixed cost structure so that in the inevitable cyclicality of our business, we can maintain profitability through the downturns as well. I think the general response to your industry question is there is enough capacity. Of course, we're interested to make sure that additional capacity doesn't come from just exporting from Japan with the yen advantage. We've been very outspoken about that. But we do think there's enough capacity for a rational, 16-plus million in the industry, to work for everybody.

Hydrogen Cars Could Be Headed To Showroom Near You