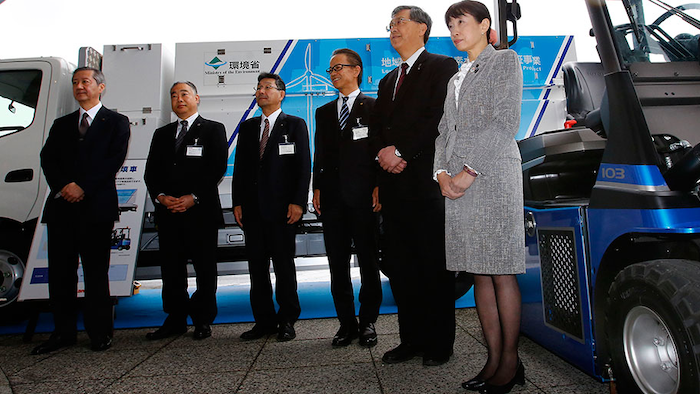 Toyota on Monday announced details of the public-private partnership with Toshiba Corp. and Iwatani Corp. and the governments of Yokohama, Kawasaki and Kanagawa Prefecture.

Under the agreement, electricity generated by a Yokohama wind power plant would fuel Toshiba's water electrolysis system, which would isolate hydrogen from water.

The compressed hydrogen would then be transported in Iwatani fueling trucks to four sites — a factory, two warehouses and a produce market — where it would power Toyota's fuel cell forklifts.

In fuel cell systems, hydrogen combines with oxygen in the air to power vehicles while leaving water as its only exhaust.

A lack of available fueling stations stunted the technology's growth in passenger vehicles, but critics also argue that the energy needed to produce hydrogen gas negates its environmental benefits.

The partnership hopes to alleviate those concerns. Toyota officials said that the wind-generated hydrogen is expected to curb carbon dioxide emissions by at least 80 percent compared to conventional grid energy or to gasoline-powered forklifts.

The project will also receive support from Japan's environment ministry. Japan hopes to develop a "hydrogen society," and Toyota executive Shigeki Tomoyama stressed that storing hydrogen is easier than storing electricity and provides a better option for cleaner energy.

"A stable supply of CO2-free hydrogen is needed," he told the Associated Press. 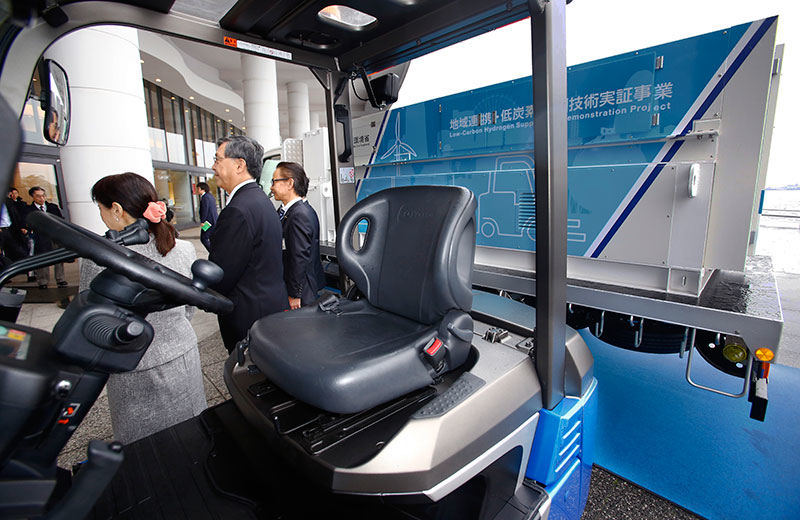 A Toyota fuel cell forklift, front, and a hydrogen fueling station and carrying hydrogen, background, are displayed in Yokohama, near Tokyo, after a press event for Hydrogen Supply Chain Demonstration Project Monday, March 14, 2016. Toyota Motor Corp. is trying to answer the main criticism of fuel cell cars: That making the hydrogen for the fuel is not clean. And so the Japanese automaker is going to make hydrogen from wind power. In a project, announced Monday, hydrogen from wind-power plant Hama Wing in Yokohama, southwest of Tokyo, will be compressed and transported by a truck to power fuel-cell forklifts at four sites in the port area - a factory, a vegetable-and-fruit market and two warehouses. (AP Photo/Shizuo Kambayashi)
Latest