Supporting the Boom in Craft Distilleries

An inside look at the Wilderness Trail Distillery, the oldest legal distillery in the U.S., and how it has expanded in setting up a new and highly automated craft distillery operation. 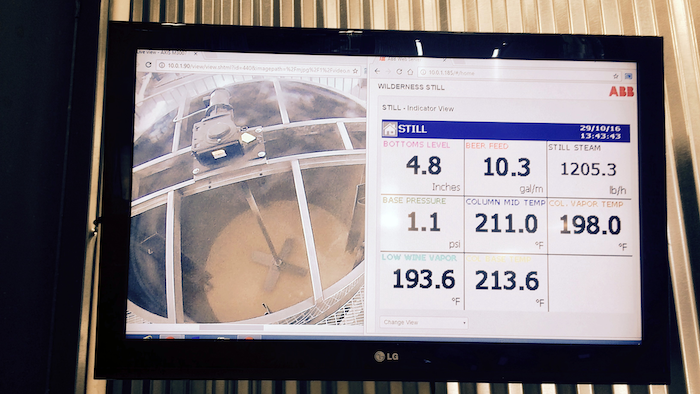 Over the last ten years craft distilleries in the U.S. have boomed into a billion dollar industry. This is partly because many states and the federal government have eased regulations for small distilleries. Also, like craft beers, consumers are showing a preference for single batch liquors physically distilled and bottled onsite from local raw materials. Growing each year, this movement shows no signs of slowing.

One such craft operation is the Wilderness Trail Distillery, the oldest legal distillery, located in historic Danville, KY. This distillery has expanded and set up a new highly instrumented premium craft operation. The new distillation equipment now produces 90 percent of the distillery's quality spirits, such as bourbon, rye whiskey, and the double-distilled base for their vodka.

The remaining 10 percent is produced from their existing pot still and rectification columns to triple distill the vodka and double distill a unique rum made with Kentucky sorghum molasses.

The new distilling equipment comes from Vendome Copper & Brass Works, located about 80 miles away in Louisville. Vendome is a well-known custom fabricator specializing in processing equipment for many different industries.

Wisner Controls in Sebastian, FL supplied most of the instrumentation and controls as well as fabrication of the control panels. Wisner chose most of the field instruments and controls from ABB's Measurement and Analytics business.

The process starts with the grain handling system to the hammer mill that accepts grain/corn/malted barley and granulates it. A control panel operates a stainless steel 4000 gallon cooker with agitator as well as four subsequent fermenters. An RTD sensor measures cooker temperature. The cooker essentially converts starches to sugars, producing mash. The fermenters generate alcohol from the mash, producing beer.

A panel-mounted ABB CM30 controls both single-loop heating and on-off cooling of the mash cooker. An ABB panel mounted DIN I/P converter takes the controller's heating signal output and sends it to a pneumatic V-ball control valve that regulates live steam to the cooker. The cooker also contains coils for cooling via chilled water.

The CM30's deviation alarm (with the alarm display disabled) serves for basic on/off control of chilled water. This deviation signal operates a solenoid that turns air on and off to a pneumatic 3-way ball valve on the chilled water line.

Selectable recipes determine the mash cook time, temperature, as well as a ramp function to control the rate of heating. Hold segments permit the operator to add grains and other ingredients to the mash. A flashing hold symbol alerts the operator that the cook program requires these additions. Large easy-to-use panel pushbuttons with digital inputs provide the start, hold, and stop functions.

Typically the operator fills the cooker with water at night. To start the fill he presses a key on the smaller CM15, actuating a relay to a solenoid that opens a pneumatic valve letting in water. A paddle wheel flowmeter meters the water flowrate, totalized by the CM15. On reaching the preset gallons the CM15 closes the inlet valve.

The operator then switches on the pre-heat function via pushbutton. The program pre-heats slowly and holds at a set temperature overnight until the operator arrives in the morning. A real-time alarm on the CM30 serves to trigger the start of the mash program and the cooker agitator at a specific time in the morning.

A pump takes the cooked mash to one of the four fermenters. The same control panel serves to operate and regulate all four. The RVG200 ScreenMaster displays and records all fermenter temperatures. The yeast reactions are exothermic, creating heat. Deviation alarms on the RVG200 provide on-off temperature control, actuating solenoids to turn chilled water valves on or off. The chilled water goes to cooling coils within each fermenter.

At Wilderness Trail distillery, the RVG200 includes a batch option. This permits it to record additional information such as batch numbers and product types as well as process data. The recorded data is stored on an SD card or can be transferred via Ethernet to a PC automatically without removing the card. The Ethernet connection allows remote display on connected monitors that are installed in different areas of the distillery for viewing wherever operators may be located.

After completion of the fermenting process, typically 72 hours, and a pump takes the mixture of grain, water, and alcohol, now called beer, to a tank called the beer well. This is essentially a holding tank under agitation to keep the solids suspended. The idea is to maintain the beer so the first and last gallons to the still are identical.

From the beer well, a pump driven by a variable frequency drive sends the beer to a small heat exchanger located above the nearly 40-foot distillation column. An ABB FEP315 ProcessMaster electromagnetic flowmeter measures the beer flow rate. The flowmeter signal goes to one of the six CM30 ControlMasters on the control panel to maintain the rate at about 10 gallons per minute to the still. The CM30 output controls the VF drive on the pump to maintain this rate.

The beer exits the heat exchanger and enters the column near the top. It cascades back and forth down the column's multiple distillation disk plates, pulling alcohol from the beer. Alcohol/steam vapor exits the top of the still. A CM30 controls the level of stillage, beer with no alcohol that accumulates at the column bottom.

A capacitance probe measures the stillage level. The CM30 operates a VF drive to pump stillage from the column at about the same rate as the beer fed into the top.

An ABB FSV430 vortex flowmeter measures the rate of steam flow that heats the column. This steam rate signal goes to an input on a CM30 that controls column steam flow rate via an I/P converter to a pneumatic V-ball control valve on the column's steam line. Column temperatures are measured with RTDs and displayed on the RVG200 recorder.

The alcohol/steam vapor from the top of the column, called low wine, flows to a chilled water condenser. From this point it becomes a liquid that's about 125 to 130 proof alcohol. The next step, called a doubler, is essentially a secondary distillation carried out in a pot still. The doubler pulls more alcohol off, increasing the proof by about 5 percent. A second condenser under temperature control liquefies the vapor from the doubler, which flows to receiving tanks.

The CM30 for the low wine condenser comes with an extended software function for cascade control. It controls low wine vapor temperature, which serves as the master setpoint for the cascade control of chilled water to the condenser. The CM30 displays both master and slave control loops. The slave controller output runs to an ABB I/P converter and then to a pneumatic chilled water control valve. Another CM30 controls the temperature of the high wine condenser.

Certain liquors require distillation to specific ranges of proof. Vodka, for example, must reach 190 proof before cutting. Bourbon, 51 percent corn, cannot exceed 160 proof before dilution to an average of 110 to 120 proof in the barrel. Bourbon always ages in brand new charred oak barrels that are used only once.

Wilderness Trail has connected the videographic recorders to the distillery's Ethernet network so operators can remotely view data and alarms. The system will also send texts or emails to alert operators of excess temperatures and power failures. Loss of power will also set the controllers to a mode that permits operators to shut down and start up safely.

Additionally, audible alarms set on certain control loops sound when variable values deviate sufficiently from their setpoints to signify serious problems. Additionally, the Ethernet connection, combined with video cameras and TV monitors, let the operators view the RVG200 ScreenMasters and views of certain operations from virtually any location in the distillery.

ABB Measurement & Analytics gratefully acknowledges the following who provided information and photos for this application note:

Nearby residents say they suffered for years from intense, putrid smells coming from open-air hog waste lagoons.
Nov 20th, 2020
Follow Us
Most Recent