Star Petroleum estimated 20 tons of oil was floating on the surface. 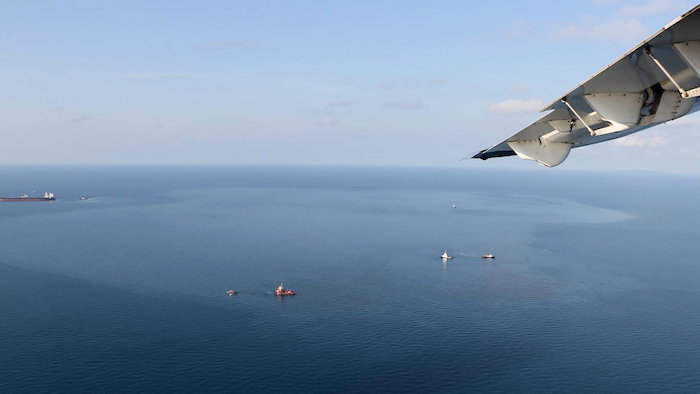 BANGKOK (AP) — Thailand’s navy was helping Wednesday to clean up a spill of as much as 128 tons (160,000 liters) of crude oil that leaked from a pipeline in the Gulf of Thailand.

The spill is near an industrial area but some of the oil could hit area beaches by Friday if it’s not dispersed before then, said Attapol Charoenchansa, director-general of the Pollution Control Department of the Ministry of Natural Resources and Environment.

The Star Petroleum Refining Public Company said the leak occurred at about 9 p.m. local time Tuesday at a mooring station about 20 kilometers (12 miles) southeast of the Map Ta Phut Industrial Estate, south of Bangkok. It was stopped shortly after midnight.

Thai Navy Spokesman Vice Adm. Pokkrong Monthatphalin said in a text message that the navy sent a surveillance plane, two ships and a helicopter to help with the clean-up. He said the helicopter would survey the area and spray a chemical to help disperse the oil slick.

Star Petroleum estimated 20 tons (about 20,000 liters) of oil was floating on the surface. It began work to remove the oil overnight and expected to remove all of it. It was unclear exactly how much oil had spilled in total, it said.

“We received good support from relevant government agencies and the private sector, including manpower, working boats and dispersant supplies to support the operation to complete clean the oil from the sea's surface,” a company statement said.