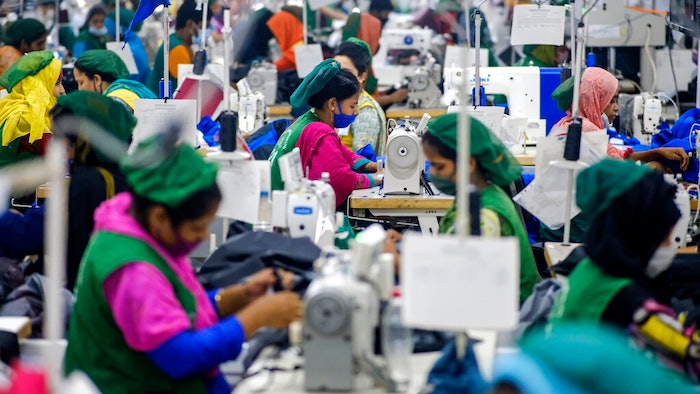 Garment employees work in a sewing section of the Snowtex Outerwear Ltd. factory in Savar, Bangladesh, on Aug. 9, 2021. Bangladesh is suffering through its deadliest surge of the pandemic, but you wouldn't know it looking at its factories, markets and malls. At the Snowtex Outerwear Ltd. factory on the outskirts of Dhaka, the company's 15,000 workers now walk through a “disinfectant tunnel” in which they are sprayed with sanitizer before they get to work turning heaps of fabric into clothing sold in countries around the world.
AP Photo/Mahmud Hossain Opu

DHAKA, Bangladesh (AP) — Bangladesh is suffering through its deadliest surge of the pandemic, but you wouldn't know it looking at its factories, markets and malls.

The South Asian nation home to 165 million people has done away with most virus restrictions, allowing businesses to reopen to enthusiastic crowds following weeks of strict measures put in place following the arrival of the highly contagious delta variant.

The move at a time when deaths and new infections are still rising and vaccination rates remain low has alarmed health experts, who warn that the country can't handle more cases when the health care system is already overwhelmed. But those in favor of reopening say the risks of staying closed are even greater, including pushing tens of millions of people back into poverty in what was already one of the world's poorest nations.

Ending the lockdown kicked off earlier this month with the reopening of the country's prized garment factories after a two week closure. Then last week most other businesses, as well as public transportation, were also allowed to start operating after being closed for nearly five of the previous six weeks. From Thursday, tourist spots, resorts and hotels could also open.

At the Snowtex Outerwear Ltd. factory on the outskirts of Dhaka, the company's 15,000 workers now walk through a “disinfectant tunnel” in which they are sprayed with sanitizer before they get to work turning heaps of fabric into clothing sold in countries around the world.

“We understand that we must protect lives. But we must not forget about the livelihoods of millions of workers in the industry,” said S.M. Khaled, the managing director of the company, which exports $250 million of goods a year.

Bangladesh's clothing factories, part of the world's second-largest garment industry, have been exempted from most of the lockdowns, other than the two weeks that ended at the beginning of the month and another 11 days at the beginning of the pandemic last March. Nevertheless, the Bangladesh Garment Manufacturers and Exporters Association estimates the industry lost $3 billion in orders last year.

Some garment factories closed and at least 300,000 workers were laid off, often without severance, according to the Bangladesh Center for Workers’ Solidarity. Many of those who kept their jobs had to take pay cuts.

Nearly 25 million more people in Bangladesh have been driven into poverty since the pandemic began, according to a report by the Power and Participation Research Center and Brac Institute of Governance and Development. Bangladesh had about 32 million people living in poverty in 2019, according to the Asian Development Bank.

Health experts say they are sympathetic to the economic cost of lockdowns, but easing restrictions shouldn't happen when just the recorded daily cases are averaging 10,000 and daily deaths have climbed above 250. They say the true case numbers are likely far higher as well.

“In such a situation, there is no logic to withdraw the lockdown,” said Be-Nazir Ahmed, a public health expert and former chief of the government’s Health Directorate.

He said easing restrictions now will only cause more suffering as more people get sick, the health care system falters and lockdowns are then reimposed.

Ahmed urged leaders to listen to epidemiologists and look at transmission data while making such decisions.

“That will ultimately save the people, save the economy, save businesses,” he said.

This isn't the first time health experts have clashed with authorities over lockdowns. Last month they were appalled when the government suspended to lockdown for eight-days so that people could celebrate the Islamic festival Eid al-Adha.

Junior Minister for Public Administration Farhad Hossain said last week that the government had to reopen the economy due to the needs and livelihoods of the people.

Caught in the middle of all of this are ordinary Bangladeshis, most of whom are not vaccinated and many of whom fear both catching the virus and not having any work.

“If we stay at home, we will starve,” said garment worker Sadia Akhter. “If the government can arrange the vaccine for us, we won’t have any trouble. We will be able to work properly then.”

Just 4% of Bangladeshis have been fully vaccinated against the virus. After commencing in January, vaccination efforts took a hit after India stopped supplying AstraZeneca to cater to rising cases at home. That prompted Bangladesh to mainly look to China to fill the unexpected shortfall.

The government has said it has deals in place to procure 210 million doses of vaccines by early next year, which would help vaccinate 80% of the population.

A return to normalcy can't come soon enough for many. Munni Begum has been out of work since last year, when the garment factory where she worked closed.

Begum's husband is a rickshaw driver but doesn't earn enough to support their family of four. The adults sometimes have to skip meals so their children can eat.

“We have to starve in order to feed our children," Begum said. “Corona has become a curse in my life.”