The once-revered brand is facing pushback. 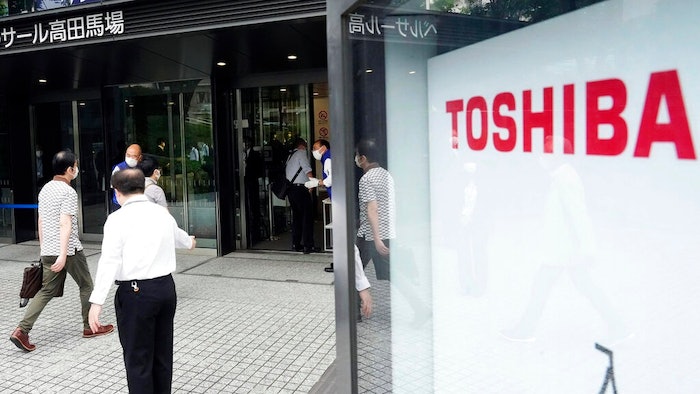 Shareholders arrive for Toshiba's general meeting of shareholders in Tokyo Friday, June 25, 2021. Battered Japanese nuclear and electronics giant Toshiba Corp. faced off with shareholders Friday, seeking to shake off serious questions about governance at the once revered brand.
Katsuya Miyagawa/Kyodo News via AP

TOKYO (AP) — Battered Japanese nuclear and electronics giant Toshiba Corp. faced off with shareholders Friday, seeking to shake off serious questions about governance at the once revered brand.

After a meeting lasting nearly three hours, Tokyo-based Toshiba failed to win shareholder approval for the reappointment of Chairman Osamu Nagayama and one other member of the board of directors. The other nine candidates were approved.

The company had removed two nominations in a last-minute attempt to placate disgruntled stockholders.

Nagayama had come under pressure to resign after an independent investigation that said Toshiba officials colluded with the Japanese government to curb foreign investors’ influence at last year's shareholder meeting.

“He bears the greatest responsibility in nominating candidates and has ultimate responsibility for the conduct of the board,” Effissimo said in a report earlier this month.

Besides Effissimo, which owns about 10% of Toshiba shares, other foreign investors include 3D Investment Partners and Harvard University’s endowment fund.

The investigation included hearings with Toshiba employees, and going over 800,000 emails, to see whether the vote tally had been dubious and Trade Ministry bureaucrats had pressured investors on how to vote.

“We take this very seriously,” Nagayama, former chief executive at Japanese drug company Chugai Pharmaceutical, told investors ahead of the vote. “We will restore transparency, get to the bottom of what happened and prevent a recurrence.”

The roiling at Toshiba highlights the bigger presence of foreign shareholders at Japanese companies.

Toshiba has promised to scrutinize the allegations and take necessary measures.

In a June 18 open letter to shareholders, Nagayama, who also previously served on the Sony Corp. board, sought backing for his reappointment.

“My priority is to provide Toshiba with the governance and leadership that you deserve. I pledge to you that I will continue to be an agent of positive change, not a protector of the status quo,” he said.

Satoshi Tsunakawa, who presided over Friday’s meeting, returned as chief executive in April.

The CVC offer was suspended. Kurumatani took over from Tsunakawa as CEO in 2018. Tsunakawa’s reappointment was not being opposed by activist shareholders.

The fortunes of Toshiba began to crumble over its heavy investment in nuclear power, although that move had been initially heralded. After the March 2011 nuclear disaster in Fukushima, safety costs ballooned. Toshiba is still burdened with the task of decommissioning nuclear plants in Japan, including the one in Fukushima.

Toshiba also had massive losses from the nuclear power operations of U.S. manufacturer Westinghouse, which Toshiba acquired in 2006. Westinghouse filed for bankruptcy protection in 2017.

Founded in 1875, Toshiba was long one of Japan’s prized brands, developing the nation’s first radar and microwaves, electric rice cookers and laptop computers.

It also invented flash memory, the chips ubiquitous in gadgets from digital cameras to cell phones. Toshiba sold its chips division in 2018, a move that accelerated the presence of more vocal stakeholders.

Toshiba, tarnished with accounting scandals in the past, has repeatedly promised to strengthen corporate governance.