The two rock shelters in Western Australia had been inhabited for 46,000 years. 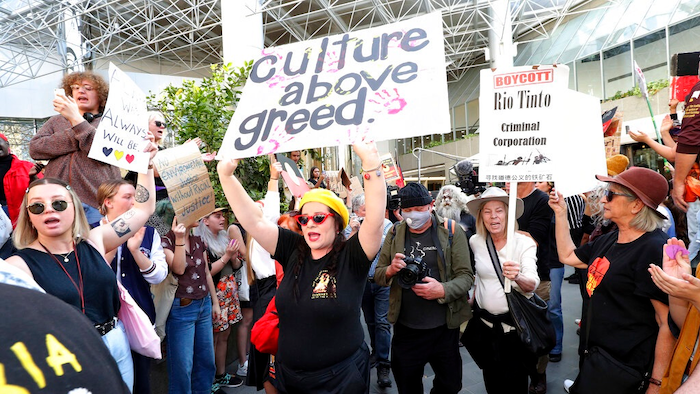 Protesters rally outside the Rio Tinto office in Perth, Australia, on June 9, 2020. Rio Tinto chairman Simon Thompson said Wednesday, March 3, 2021 he was accountable for the mining giant destroying sacred Indigenous sites in Australia to access iron ore and he will not seek reelection as a board director next year.
Richard Wainwright/AAP Image/ via AP

CANBERRA, Australia (AP) — Rio Tinto chairman Simon Thompson said Wednesday he was accountable for the mining giant destroying sacred Indigenous sites in Australia to access iron ore and he will not seek reelection as a board director next year.

Thompson’s announcement came after former chief executive Jean-Sebastien Jacques announced his resignation last September over the destruction in May of two rock shelters in Juukan George in Western Australia state that had been inhabited for 46,000 years.

The company’s successes in 2020 were “overshadowed by the destruction of the Juukan Gorge shelters ... and, as chairman, I am ultimately accountable for the failings that led to this tragic event,” Thompson said in a statement.

“The tragic events at Juukan Gorge are a source of personal sadness and deep regret, as well as being a clear breach of our values as a company,” he added.

Jamie Lowe, chief executive of the National Native Title Council, which represents Australia’s traditional owners of the land, described Thompson's departure as a necessary step that Indigenous people had been demanding since the rock shelters were blasted.

“We think the cultural shift within Rio Tinto needed to happen immediately and it’s too bad its taken some eight months to be actually able to see that come to fruition,” Lowe said.

Jacques was replaced as chief executive in January by Jakob Stausholm.

Executives Chris Salisbury and Simone Niven also left the company last year due to shareholder anger at the destruction that outraged traditional owners of the gorge, the Puutu Kunti Kurrama and Pinikura people.

Rio Tinto announced on Wednesday that director Michael L’Estrange would retire from the board at the conclusion of the April annual general meetings in Britain and Australia.

L’Estrange led a widely criticized internal review of how the rock shelters came to be blasted against traditional owners’ wishes.

The review concluded in August that there was “no single root cause or error that directly resulted in the destruction of the rock shelters.”

But internal documents revealed in September that Rio Tinto had engaged a law firm in case the traditional owners applied for a court injunction to save the rock shelters.

For the first time in 60 years of human spaceflight, a rocket will blast into orbit with no professional astronauts on board.
Sep 14th, 2021

The Wargaming and Advanced Research Simulation Laboratory will be used for space technology R&D.
Sep 8th, 2021
Follow Us
Most Recent