The company hopes to manufacture 600 million doses by the end of this year. 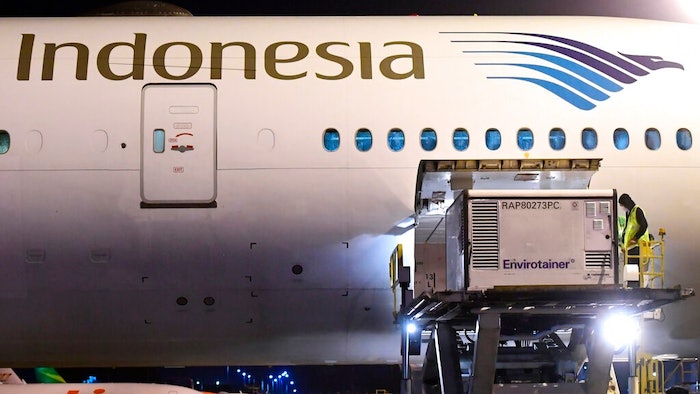 In this photo released by Indonesian Presidential Palace, workers unload a container containing experimental coronavirus vaccines made by Chinese company Sinovac from the cargo bay of a Garuda Indonesia plane at the Soekarno-Hatta International Airport in Tangerang, Indonesia, late Sunday, Dec. 6, 2020. Indonesia's government said more than a million doses of an experimental COVID-19 vaccine developed by China-based biopharmaceutical company Sinovac Biotech arrived in the country late Sunday and more are expected to arrive in early January.
Indonesian Presidential Palace via AP

TAIPEI, Taiwan (AP) — Chinese vaccine company Sinovac announced Monday that it is planning to complete a new facility to double its annual vaccine production capacity to 600 million doses by the end of the year, while also securing a $500 million investment in a boost to its COVID-19 vaccine development efforts.

Sino Biopharmaceutical Ltd., a pharmaceutical conglomerate, bought a 15% stake in Sinovac for an investment of $500 million. The funds will allow the company to “improve our vaccine sales capabilities, expand in Asia markets, develop and access new technologies, and most importantly, accelerate our efforts to help combat the global pandemic,” Sinovac CEO Yin Weidong said in a statement.

On Sunday, 1.2 million doses of its experimental vaccine arrived in Indonesia and are expected to be approved for use soon.

Sinovac's candidate is a two-dose inactivated vaccine, an old-school technology in which a live virus is killed and then purified. It can be stored at 2 to 8 C (36 to 46 F), within the range of a normal refrigerator, unlike some other vaccines candidates that require far lower temperatures.

Sinovac's experimental vaccine is currently approved for emergency use in China, although it has not yet obtained final market approval. Under emergency use, it has been distributed to groups the Chinese government deemed suitable, including front-line medical workers and border personnel.

The latest public data from the company, published in the science journal Lancet, showed its candidate produced lower levels of antibodies in people than those who have recovered from COVID-19.