The scale of the decline in EU business activity was worse even than the most pessimistic forecasts. 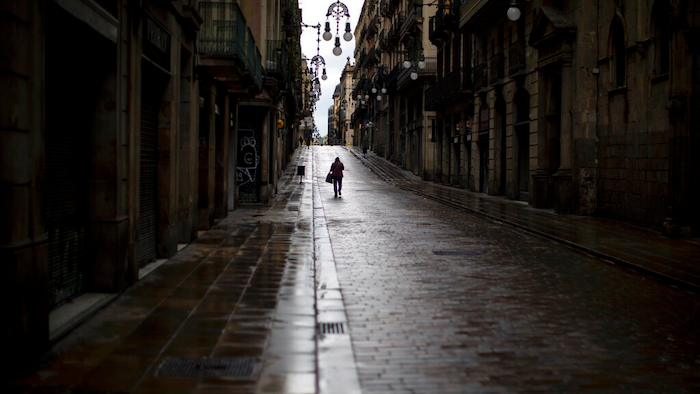 A man walks along an empty street in downtown Barcelona, Spain, Monday, April 20, 2020 as the lockdown to combat the spread of coronavirus continues.
AP Photo/Emilio Morenatti

LONDON (AP) — Europe's economies are heading for unprecedented recessions as a result of the lockdown measures put in place by governments to get a grip on the coronavirus pandemic, closely watched surveys indicated Thursday.

The scale of the decline in business activity recorded in monthly surveys was staggering, worse even than the most pessimistic forecasts, and is likely to lend urgency to discussions of European Union leaders about a rescue support package.

“The harsh lockdown measures to slow the spread of COVID-19 have crippled economic activity across the continent,” said Florian Hense, a European economist at Berenberg Bank.

EU leaders will hold a virtual summit Thursday at which they are expected to endorse a financial aid package worth 540 billion euros ($587 billion) that would help support wages, keep companies afloat and fund health care systems. EU institutions and nations have already mobilized around 3.3 trillion euros ($3.6 trillion).

If Thursday's surveys are anything to go by, Europe is going to need all of that.

Financial information firm IHS Markit said its purchasing managers' index for the eurozone — a measure of economic activity — plummeted to an all-time low of 13.5 points in April from the previous record low of 29.7 in March. The firm has been compiling data for more than 20 years.

Anything below 50 indicates a contraction in activity, with a lower number indicating a sharper drop. So the scale of the April decline suggests that the eurozone is heading for an unprecedented slump. At its lowest during the global financial crisis in 2009, the index only fell to 36.2.

“With large swathes of the economy likely to remain locked down to contain the spread of COVID-19 in coming weeks, the second quarter looks set to record the fiercest downturn the region has seen in recent history," said Chris Williamson, chief business economist at IHS Markit.

Williamson said that at the current rate, the eurozone is shrinking by a quarter-on-quarter rate of 7.5%.

The services sector has borne the brunt of the lockdown measures, which have included widespread temporary business closures and and draconian restrictions on movement. From restaurants to travel and tourism, business has fallen off a cliff as companies have had to enforce shutdowns or severely curtail their activities. Manufacturing is barely faring better, with the lockdown causing a collapse in global demand and huge disruptions in the supply chain.

As a result, unemployment is expected to rise sharply over the coming months. Some economists expect the eurozone unemployment rate to double from the current rate of 7.3% even after accounting for the millions of people who remain on payroll but are out of work and losing income.

Unemployment is also set to ratchet up higher in Britain, which has now left the EU. The equivalent purchasing managers' survey for the U.K. showed the main index slumping to an all-time low of 12.9 points. Analysts at Capital Economics say the U.K. economy is headed for its biggest quarterly economic contraction in more than a century.