Chinese exporters of all sorts of products, from power adapters and computers to vacuum cleaners, are anxiously hoping trade talks in Washington this week will yield a deal that might stave off higher U.S. tariffs on imports from China. 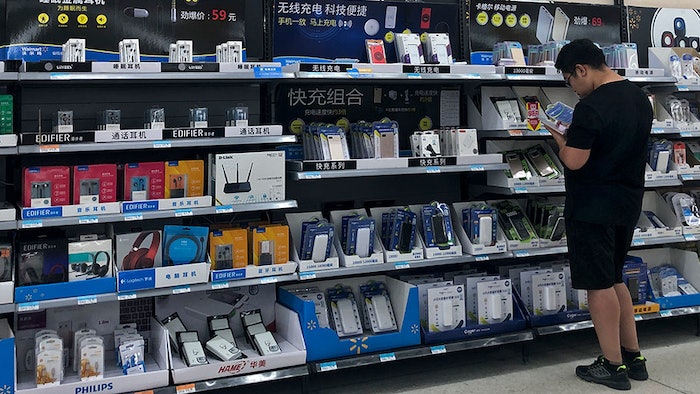 BEIJING (AP) — Chinese exporters of all sorts of products, from power adapters and computers to vacuum cleaners, are anxiously hoping trade talks in Washington this week will yield a deal that might stave off higher U.S. tariffs on imports from China.

Companies across China are bracing for a tariff hike on Friday after President Donald Trump, complaining Beijing was backtracking and the talks on a festering trade dispute were taking too long, said he would raise import duties on $200 billion of Chinese goods to 25 percent from 10 percent.

Amber Chen, sales manager for a vacuum cleaner manufacturer based in southern China, says her company has $100 million in exports to the U.S. at stake.

"I really hope that the two countries can reach an agreement," Chen said in a phone interview. "We just can't swallow the costs of a tariff increase."

The trade dispute erupted last summer with the first round of U.S. tariff increases. It deepened with Trump's announcement via Twitter on Sunday that he plans to raise tariffs and have them cover all products imported from China, as of Friday.

The tariffs have devastated many factories in Chinese coastal regions that serve the U.S. market. Industries such as electronics have seen sales to the U.S. plummet up to 40 percent. Overall Chinese exports to the U.S. dropped 13 percent in April from a year earlier.

Many Chinese companies are reluctant to speak publicly about their problems, especially those linked to sensitive topics such as the ruling Communist Party's policies on trade and technology.

But sales managers of five Chinese companies that depend heavily on exports to the U.S. told The Associated Press that while they have managed to adjust to current tariff levels with minimal trouble, a jump to a 25 percent tariff would make doing business with the U.S. virtually impossible for most of them.

"If the tariffs rise to 25 percent, then we're done for," said James, a sales manager for a computer monitor manufacturer in Shenzhen, China's southern tech hub.

He declined to give his full name. He said 30 to 40 percent of his company's products are exported to the U.S.

Before this week, both the U.S. and China said the trade talks were making steady progress, giving the impression that the world's two biggest economies were approaching an agreement. Trump's unexpected threat Sunday sent global financial markets into a tailspin. On Thursday, China vowed to defend its interests and retaliate with "necessary countermeasures" if the increases take effect Friday as planned.

Talks on resolving the dispute resumed later Thursday, and Trump said that he'd received "a beautiful letter" from Chinese President Xi Jinping and would "probably speak to him by phone."

China has kept official statements on the latest trade talks, the 11th round, low-key and restrained. That's in contrast to more aggressive rhetoric in earlier rounds. Domestic media avoided reporting on Trump's tweeted threat for hours after it was posted.

If the tariff increase goes ahead, the impact will be deeply felt by small- and medium-sized enterprises, said Shawn Yang, sales manager for a company in Shenzhen that produces electric power adapters.

Many of the company's products are designed for use in the U.S., Yang said, so it would be difficult to shift sales to other markets.

He said he's confident it can weather the trade war because of the quality of their products, though some buyers are waiting for a conclusion to the trade dispute before placing new orders.

Yang said he has faith the two countries will reach an agreement.

"(The trade war's) impact is too far-reaching," he said. "It's not possible for them to keep fighting like this."