As Brexit Looms, UK 'Preppers' Stock up and Hunker Down

For almost as long as Britain and the European Union have been wrangling over Brexit, Melvin Burton has been preparing for a bumpy landing. 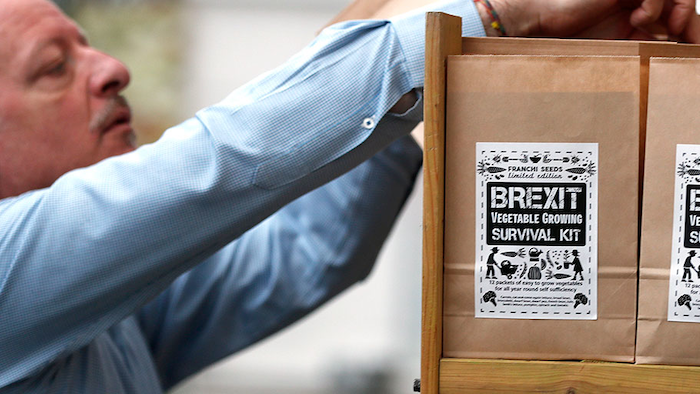 LONDON (AP) — For almost as long as Britain and the European Union have been wrangling over Brexit, Melvin Burton has been preparing for a bumpy landing.

He's growing vegetables, drying fruit and buying in bulk. He reels off the cornucopia of cans filling his shed and the cupboard under his stairs: "Tomato sauce, chopped tomatoes, corned beef, tuna, honey, baked beans, tins of ham. Cat food, of course, because I don't want them to go hungry."

"I started buying stuff about a year and a half ago," said the 45-year-old, who lives with his wife and 8-year-old son in a village near Cambridge in eastern England. "No one seemed to be accepting that there was a real problem."

Plenty of people think there is a problem now.

Britain is scheduled to leave the EU in less than a month, on March 29, but its departure terms are still unknown. A U.K.-EU deal designed to ensure a smooth departure has been rejected by Britain's Parliament, and lawmakers are due to vote in mid-March on three starkly differing options: leave with a deal, leave without a deal or postpone Brexit. Quitting the bloc without a deal would, overnight, bring tariffs, customs checks and other barriers between Britain and the EU, and could lead to gridlock to British ports.

U.K. officials and companies have been bracing for potential trade disruption by stockpiling everything from ice cream and chocolate cookies to medicines and body bags. But the government still warned this week that British people and businesses are unprepared for the shock of a "no-deal" exit.

Britain imports almost a third of its food from the EU — even more during the early spring "hunger gap," when domestic crops have yet to be harvested and retailers rely on fresh produce from Spain, Portugal, the Netherlands and further afield.

Supermarket chief executives have warned the government that Britain's available storage space is full, and "even if there were more space it is impossible to stockpile fresh produce, such as salad leaves and fresh fruit."

The government says there will be severe disruption to freight across the English Channel and "reduced availability and choice of products," especially fresh fruit and vegetables, if Britain leaves the EU on March 29 without a divorce deal. And it has warned that "there is a risk that consumer behavior could exacerbate, or create, shortages in this scenario."

Some people, like Burton, are taking no chances. He's a member of a Facebook group titled "48 Percent Preppers," with more than 10,000 members. The name refers to the 48 percent of electors who voted to remain in the EU in Britain's 2016 referendum. "Remain" voters make up the bulk of Brexit hoarders; "leave" supporters are apt to dismiss warnings of food and medicine shortages as "Project Fear."

Members of the group and several similar online forums swap tips on what to buy and how to store it, whether to stock up on fuel and how to knit their own clothes. Others have seen a commercial opportunity. One company in northern England sells "Brexit boxes" containing freeze-dried food, a water filter and a fire-starter for almost 300 pounds ($400).

In London, seed importer Paolo Arrigo put together 12 months' worth of easy-to-grow seed packets — carrots, beans, lettuce, pumpkin, tomatoes — and labelled it a Brexit Vegetable Growing Survival Kit. He has sold hundreds in a few weeks.

Arrigo's business is relatively Brexit-proof, because "seeds sell better in a crisis." But he thinks leaving the EU is a big mistake, and understands why people are worried.

"I had never heard the word 'preppers' before a month ago, and I kind of assumed it was Americans who were buying guns and ammo and tinned food and water," Arrigo said. "Now I belong to four Brexit preppers websites. Whether you agree with it or not, it is a thing. People are stockpiling, and that is because of the uncertainty.

"That's where we are as a country: digging for Brexit," he said, echoing a World War II campaign urging Britons to grow vegetables and "dig for victory."

Many Britons think the Brexit preppers are overreacting, and they remain a minority. Bank of England Governor Mark Carney said this week that "we're not picking up evidence of household stockpiling in any material sense."

Some skeptics compare Brexit hoarding to the Y2K millennium bug: a catastrophe that never came to pass. But Burton, who tests software for a living, says internet meltdown was avoided at the turn of the millennium because "we spent vast quantities of people and money and man hours making sure it didn't happen."

He's not confident Britain is that well prepared for Brexit — though he hopes he's wrong.

"I would be very, very happy if it turns out that none of this is going to be necessary," Burton said.

"This is a pain in the neck. I'd rather not be doing all this. I would rather be coming home, worrying about what I'm going to watch on Netflix and then ordering an Indian takeaway."