A shadowy Israeli billionaire who made his fortune in the insular world of diamonds has suddenly found his empire in jeopardy after close associates were busted in a massive smuggling ring and an employee mysteriously plummeted to her death from his high-rise Tel Aviv office building. 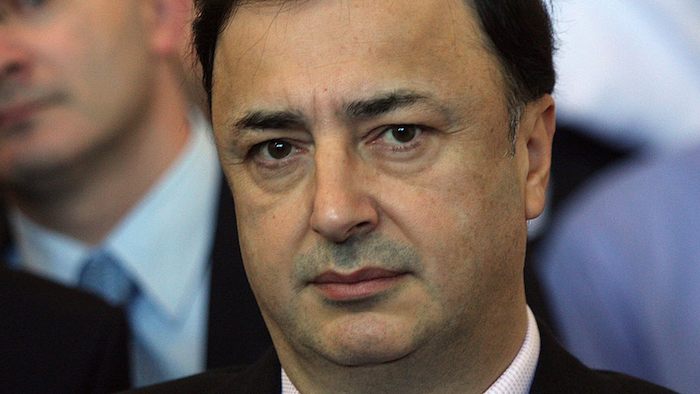 TEL AVIV, Israel (AP) — A shadowy Israeli billionaire who made his fortune in the insular world of diamonds has suddenly found his empire in jeopardy after close associates were busted in a massive smuggling ring and an employee mysteriously plummeted to her death from his high-rise Tel Aviv office building.

Lev Leviev, known in Israel as the "king of diamonds," has enjoyed close ties to Russian President Vladimir Putin and has a reputation for generous philanthropy to Jewish causes. But now, Israeli police are demanding that he return from Moscow for questioning on allegations of smuggling, money laundering and tax offenses.

It's a stunning downturn for one of Israel's most well-known tycoons. Born in the former Soviet republic of Uzbekistan, the 62-year-old Leviev immigrated to Israel as a youth in 1971 and began working as an apprentice in a polishing plant in Israel's then-booming diamond industry. His meteoric rise saw him later establishing a plant of his own, and striking deals in Angola and Russia that briefly undercut the DeBeers diamond giant. He later branched out to real estate, construction and chemicals, with his Africa-Israel holding and investment company becoming a powerful player in the Israeli market and establishing Leviev as a precursor to a wave of Jewish oligarchs from the former Soviet Union who have become power brokers in Israel.

Though his net worth is estimated at more than $1 billion, Leviev suffered heavy losses in recent years because of his massive investment in Russia, where he is known to enjoy strong government support. Leviev, who moved to London a decade ago and recently relocated to Moscow, denies any allegations of impropriety and is currently negotiating terms of his return with Israeli police. But insiders say that even if he hasn't been formally charged with a crime, his mere association with the suspects accused of smuggling some $80 million worth of diamonds hidden in briefcases over several years could be devastating to his brand.

"I can't believe he would put himself in such a situation. He is still a strong oligarch, and this is not his style. A smuggling of this scale could topple businesses far larger than his," said Alex Kogan, a journalist who has covered the oligarchs in Israel for the local Russian-language press. "Even if he is not involved, this whole affair will harm him greatly."

Leviev's son and brother were arrested in early November, along with four others, and are currently out on bail in what has been dubbed the "Black Diamond" affair.

The saga took a more tragic turn on Nov. 11, when Mazal Hadadi, a bookkeeper for Leviev's diamond firm LLD, fell to her death from a small, elevated bathroom window on the 10th floor of his office building next to Israel's Diamond Exchange.

The death was initially reported as a suicide, the supposed result of a breakdown following tough police questioning about the smuggling affair. The family acknowledges Hadadi was rattled by the investigation but insists the mother of three would never take her own life and was on her way to meet her husband after work when a mysterious call to her cell phone made her abruptly return to the office.

Israel's reeling diamond industry has been trying to distance itself from the affair. With tens of thousands of employees in the 1970s, Israel was once the world's largest diamond trading center but fell on hard times in recent years because of the proliferation of synthetic diamonds and outsourcing of polishing plants to countries like India, where wages are far lower. Dubai has also cut away at Israel's status as the regional gateway for trading because of tax benefits for companies.

But Israel is still a leader in the polishing of large diamonds and a hub for e-commerce and technological developments. Though officially still a member of the Israel Diamond Exchange, Leviev hasn't been seen in Israeli diamond circles in years as his business interests focused elsewhere and his brother took over the leadership at LLD.

An official in the industry, who spoke on condition of anonymity because of the ongoing investigation, said the affair has put a strain on other Israeli diamond dealers. The Israeli market is now considered to be a highly regulated industry that has cleaned up its act after decades of shady dealings and association with "blood diamonds" mined in conflict zones that financed human rights violations. In 2003, Israel joined the Kimberley Process by which members meet annually to discuss strengthening controls over conflict diamonds.

Leviev's alleged motivations are also a mystery, since diamonds entering Israel only need to be declared and inspected rather immediately taxed.

For now, there are far more questions than answers. The Israeli media has been filled with trickles of information along with interviews with the bereaved bookkeeper's family, criticism of police conduct and speculation over whether Leviev will return and be arrested.

In a statement, Leviev's Israel office denied all allegations against its employees.

"Mr. Leviev and all of the companies under his control operate in accordance with accepted norms, adhering to the law," it said. "We hope that this matter will be clarified quickly and the suspicions will be proven baseless."

It's the kind of attention Leviev has long tried to avoid, preferring to limit his media coverage to his philanthropy for the Chabad movement, a Hasidic sect that performs outreach to Jews around the world, rather than his diamond dealing.

Sales were also up by double-digit percentages in most of Europe and the U.S.
May 7th, 2021