Britain's Brexit chief appealed for Conservative Party unity on Monday, as he warned the European Union that the U.K. will leave the bloc without a divorce deal rather than accept one that makes Britain follow too many EU rules. 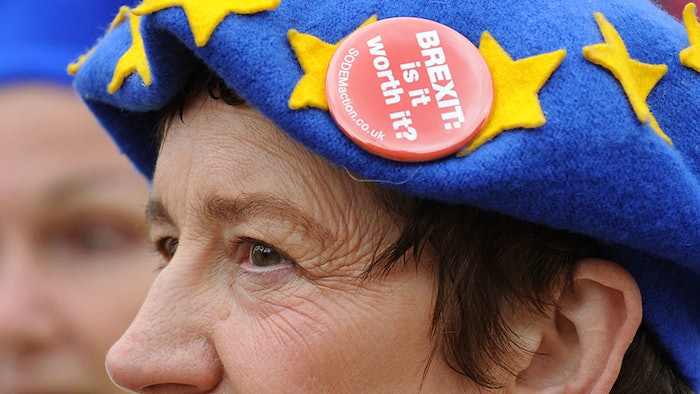 BIRMINGHAM, England (AP) — Britain's Brexit chief appealed for Conservative Party unity on Monday, as he warned the European Union that the U.K. will leave the bloc without a divorce deal rather than accept one that makes Britain follow too many EU rules.

Brexit Secretary Dominic Raab's call to "come together, because this is a moment for the optimists" fell largely on deaf ears at the Conservative conference in Birmingham. Instead, pro-Brexit politicians took pot-shots at the EU, pro-EU Conservatives battled to stop the U.K.'s exit from the bloc — and British Prime Minister Theresa May was caught in the middle, trying to cling to power.

The Conservatives are holding their annual meeting in the central English city 10 days after EU leaders told May that her proposed divorce terms were unacceptable. That rejection has sparking an impasse in Brexit negotiations and a crisis for Britain's leader, with less than six months to go until Britain leaves the 28-nation bloc on March 29.

Raab accused the EU of casting "jibes" at Britain and having a "theological approach (that) allows no room for serious compromise."

Raab said that if the EU tried to "lock us in via the back door" — by keeping Britain in the bloc's single market or customs union — "then we will be left with no choice but to leave without a deal."

Raab's combative comments followed Foreign Secretary Jeremy Hunt's remark on Sunday that the EU should not try to prevent a smooth departure by Britain because "it was the Soviet Union that stopped people leaving." His comparison of a bloc that includes several former Communist countries to the USSR drew a rebuke from former British diplomats and from the EU.

"We would all benefit, and in particular foreign affairs ministers, from opening a history book from time to time," said European Commission spokesman Margaritis Schinas.

Pro-Brexit flag-waving got a warmer reception at the Conservative conference, where party members mixed with lobbyists, think-tank academics and a group of men dressed as soldiers from the Battle of Bosworth in 1485 — a time when Britain was engulfed in civil war and Europe seemed far away.

May, meanwhile, faces a growing threat to her leadership amid deepening opposition to her Brexit plan, which would keep Britain in the EU single market for goods — in return for following EU regulations — while leaving it free to make its own rules on services.

Advocates of "hard Brexit" argue that would make the U.K. a "vassal" of the EU, whereas a clean break with the bloc would let Britain strike new trade deals around the world.

Former Foreign Secretary Boris Johnson, a rival of May's who is a likely future contender for her job, has called the prime minister's plan "preposterous" and "deranged." Johnson is set to address party delegates on Tuesday, a day before May's keynote speech to the conference.

In the speech widely seen as Johnson's leadership manifesto, he will urge the party to "follow our conservative instincts" and cut taxes.

On May's other flank are pro-EU ministers such as Treasury chief Philip Hammond, who called Johnson's claims about Brexit "fantasy land." Hammond used his own conference speech to stress that the Conservative Party "is, and always will be, the party of business."

It's a sign of how Brexit has upended British politics that the party of free-market former Prime Minister Margaret Thatcher needs to make such an assurance.

But many British businesses are anxious about Brexit, fearing barriers to trade and recruiting workers could hammer the U.K. economy.

Hammond echoed their concerns, saying "our businesses, and the workers whose jobs depend on them" need "friction-free access" to EU markets.

Hammond backed May's Brexit plan, but EU leaders say it amounts to "cherry picking" the benefits of membership in the bloc without assuming the costs and responsibilities.

May is sticking to her proposal. But with Brexit day looming on March 29, chances are rising that the U.K. could find itself crashing out of the bloc without a deal. The government has acknowledged that could leave planes grounded and trucks backed up at British ports.

Pro-EU Conservatives, who have been sidelined since the country voted in 2016 to leave the EU, think opinion is turning in their favor now that the downsides of Brexit are becoming clearer. Several hundred people packed a meeting in Birmingham on Monday to hear from Conservatives calling for a "people's vote" — a new referendum on any final Brexit deal, with the option to remain in the EU.

Speakers warned that the party would be punished by voters if it pushed through a "hard" Brexit.

"Every single socio-economic ill that takes place between now and the next general election is going to be blamed on 'Tory Brexit,'" said lawmaker Phillip Lee, who resigned as a junior minister over his opposition to Brexit.

Lee claimed to know three government ministers who privately supported a new referendum, and urged Conservative lawmakers with doubts about Brexit to speak up.

"There are so many private conversations that should now be public conversations — and notably by British businesses," Soubry said. "We have only six months to save our country."

Lorne Cook in Brussels contributed to this story.