The Trump administration has asked China to reduce its trade deficit with the U.S. by $200 billion by the end of 2020, striking an assertive stance in talks aimed at averting a trade war between the world's two-largest economies. 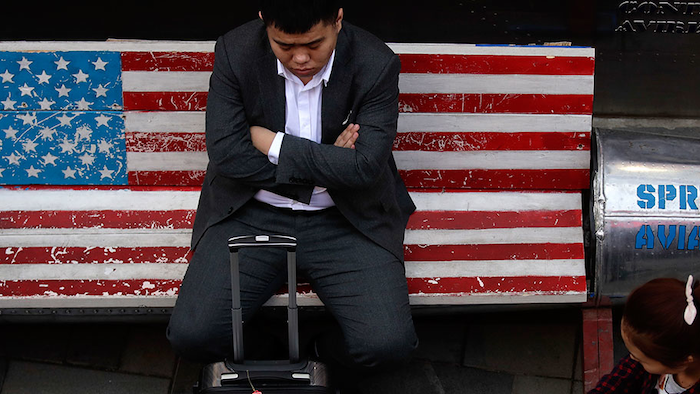 BEIJING (AP) — The Trump administration has asked China to reduce its trade deficit with the U.S. by $200 billion by the end of 2020, striking an assertive stance in talks aimed at averting a trade war between the world's two-largest economies.

A U.S. official confirmed the authenticity of a document making that and other requests that were presented to China ahead of two days of trade talks that ended Friday. The official spoke on condition of anonymity due to the confidential nature of the talks.

After the talks wrapped up, the Commerce Ministry said the two sides had agreed to set up a mechanism to try to work through their dispute, though differences remained, Chinese state media reported. The report did not give specifics, suggesting little progress had been made.

The U.S. document is described in an introductory disclaimer as being provided to the Chinese ahead of the visit to Beijing by U.S. Treasury Secretary Steven Mnuchin and other U.S. officials this week.

It also included demands that China immediately stop providing subsidies to industries listed in a key industrial plan. China must end some of its policies related to technology transfers, a key source of tension underlying the dispute, the list says.

The U.S. wants China not to retaliate against U.S. measures currently being pursued against it. For instance, the U.S. says China should agree not to target U.S. farmers or agricultural products, and "not oppose, challenge or otherwise retaliate" when the U.S. moves to restrict Chinese investment in the U.S. in sensitive sectors.

Analysts said the Chinese were likely to view the aggressive posture struck by the U.S. as unreasonable and akin to bullying, potentially making it difficult to tone down friction over such issues.

Yu Miaojie, professor at Peking University's National School of Development, described some of the demands as "like lions opening their mouths."

"When it comes to negotiations, both sides can provide a list of requests and we will seek common ground while reserving our differences," Yu said. "If one side provides a list with unreasonable requests, the Chinese government is unable to accept it."

"China won't be frightened by this kind of threat," wrote Hu Xijin, the chief editor of the Global Times, a nationalistic tabloid affiliated with the Communist Party mouthpiece, in a post on the Sina Weibo website. Hu said he believed China would engage in talks seriously but also be fully prepared for them to fail.

"China will never trade off its core interests," Hu wrote.

Still, the list was welcomed by a U.S. business group which has lobbied the Trump administration for greater clarity on what it wanted China to do. Some groups had complained the administration was sending mixed messages.

"We've been saying that the Trump administration needs to define success and what specific outcomes it is seeking," said Jake Parker, vice president for China of the U.S.-China Business Council. The list submitted to China helps "lead to a solution and avoid tariffs and other sanctions," he said.

China's Commerce Ministry did not respond to a request for comment on the U.S. demands and did not refer to them in the remarks released by state media Friday.

"Both sides realized that there are still relatively big differences over some issues and that they need to continue to work hard to make more improvements," the report said.

It said the discussions included expanding U.S. exports to China, trade in services, the protection of intellectual property rights and how to resolve the use of tariffs and non-tariff measures.

There was no immediate comment from the U.S. delegation. A motorcade was seen leaving the U.S. Embassy in Beijing on Friday afternoon and the group departed China later in the day.

The list of U.S. demands was first reported by The Wall Street Journal on Friday.

Earlier Friday, Mnuchin sounded a positive note about the two days of talks, saying at a Beijing hotel on his way to talks that they were having "very good conversations."

The group led by Mnuchin included Commerce Secretary Wilbur Ross, U.S. Trade Representative Robert Lighthizer and White House trade advisor Peter Navarro, a fierce China critic. But the officials are seen as holding conflicting views on how to resolve the dispute. That could have undermined their ability to negotiate with the Chinese.

His administration has threatened to impose new tariffs on roughly $150 billion in Chinese goods. China in turn announced plans for its own tariffs on U.S. goods.

It was unclear if the talks had cleared the air enough to stave off such potentially damaging moves and alleviate uncertainty for investors and businesses likely to be affected by such measures.

The dispute will be tough to resolve because the fundamental issue is that the U.S. wants to stop China from moving up the so-called value chain as it transforms into an advanced economy, said Louis Kuijs, head Asia economist at Oxford Economics. But "there's no way that China's going to change its strategy on that."

Kuijs said the ball is now in the U.S. court on deciding whether the talks were fruitful and merit more discussion or that they're stalled and Washington needs to take more serious measures targeting China.

This is "much more than just a trade dispute," Kuijs said. "This is very much about economic strategy and the U.S. coming to grips with a big country running its economy in a way that the U.S. is uncomfortable with, and becoming successful, and starting to threaten U.S. dominance."

Separately, the Commerce Ministry said the U.S. officials had agreed during the talks to raise China's objections to sanctions leveled against Chinese telecom gear maker ZTE with President Donald Trump.

ZTE pleaded guilty in March 2017 and agreed to pay a $1.19 billion penalty for having shipped equipment to Iran and North Korea in violation of U.S. regulations. The U.S. Commerce Department said employees involved were paid bonuses instead of being punished.