China Builds Ambitiously In Africa As U.S. Sounds The Alarm

From Ethiopia to Djibouti, Kenya to Egypt, the United States is sounding the alarm that the Chinese money flooding Africa comes with significant strings attached. 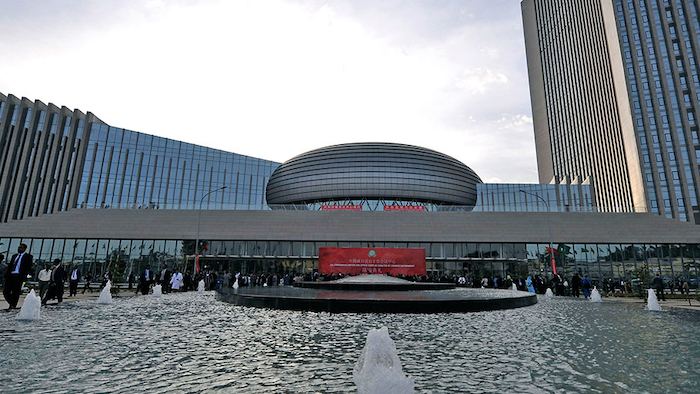 ADDIS ABABA, Ethiopia (AP) — The sleek, green-and-white trains glide past the congested, ragged streets of Addis Ababa along the city's new light rail — built and financed by China. The towering silver African Union headquarters here was built by China, too. So was the new ring road system around the city. And the new railway connecting landlocked Ethiopia to Djibouti.

Across the Atlantic Ocean, America has noticed.

From Ethiopia to Djibouti, Kenya to Egypt, the United States is sounding the alarm that the Chinese money flooding Africa comes with significant strings attached. The warnings carry distinct neocolonial undertones: With Beijing's astonishing investments in ports, roads and railways, the U.S. says, come dependency, exploitation and intrusion on nations' basic sovereignty.

"We are not in any way attempting to keep Chinese investment dollars out of Africa. They are badly needed," U.S. Secretary of State Rex Tillerson said this week in the Ethiopian capital. "However, we think it's important that African countries carefully consider the terms."

Those terms lead to deals in which Chinese workers, not Africans, get the construction jobs, Tillerson and other U.S. officials warn. They say Chinese firms, unlike American ones, don't abide by anti-bribery laws, fueling Africa's pervasive problems with corruption. And if countries run into financial trouble, they often lose control over their own infrastructure by defaulting to a lender that historically has not always been forgiving.

Some African countries now owe sums of up to 200 percent of their annual economic output, the U.S. has said, with most debt owed to China.

There are obvious reasons why the United States would want to cast itself and its companies as a more favorable alternative to China, the geopolitical rival and economic competitor whose influence is also on the rise in Latin America, Europe and the Middle East.

But there's a problem, African politicians and economists say: China, unlike the United States, is showing up on the continent with a generous checkbook in hand. Given the unpredictability involved in investing in poorer countries, China is often the only one willing to take the risk.

China vehemently disputes that its enterprises in Africa or elsewhere are exploitive, arguing instead that its generosity illustrates its commitment to the rest of the world's economic and social development.

"No one dominates, and all parties participate on an equal footing," Chinese Foreign Minister Wang Yi said in his annual news conference Thursday. "There is no secret operation, but an open and transparent operation — no 'winner-take-all,' but all see mutual benefits and 'win-win' results."

The eye-popping investments through China's "One Belt, One Road" initiative, believed to run into the trillions of dollars, form just one part of the Asian power's bid to promote a new global system that puts Beijing at the center. Equally alarming to the U.S. are China's military designs.

In Djibouti, where Tillerson visited Friday, China has built its first overseas base along the key shipping route that links Europe and Asia. Its "string of pearls" plan calls for building a network of ports stretching from China to the Persian Gulf. Beijing has also been busy building artificial islands and then taking steps toward militarizing them in a bid to expand its control over waters far from its coast.

China's new base in Djibouti, another country immensely indebted to Beijing, is just miles away from the only permanent U.S. military base in Africa. Though it's China's only African base so far, Gen. Thomas Waldhauser, head of U.S. Africa Command, predicted this week that "there will be more."

"We are not naive to think that some of the activities the Chinese are doing in terms of counterintelligence there — they are taking place," Waldhauser told the House Armed Services Committee. "But it just means that we have to be cautious, we have to be on guard."

For better or worse, U.S. suspicions about China's ambitions are playing out far beyond the confines of Africa. Chinese companies are building or financing power plants in Pakistan and Kyrgyzstan, managing a port in Greece and launching railway projects in Thailand and Tajikistan, with aggressive plans to continue its expansion into Latin America.

In Sri Lanka, the former president suffered a surprise election defeat in 2015 after his opponent criticized him for running up some $5 billion in debt to China to fund construction. In December, Sri Lanka's government sold an 80 percent stake in the port in Hambantota to a Chinese state-owned company after falling behind in repaying $1.5 billion borrowed to build it.

In Africa, some of the China-funded roads have started to crumble, the U.S. has said, due to shoddy construction. And in January, the French newspaper Le Monde reported that China planted listening devices in the $200 million headquarters it built for the African Union in 2012. China denies that claim.