Ford will close one of its main European factories by the end of 2014, a move that will result in 4,500 direct job losses and 5,000 more among subcontractors. Exactly half a century after construction on the Genk plant started, Ford told a management council there that production was winding down since slumping European sales has forced a restructuring of its plants. 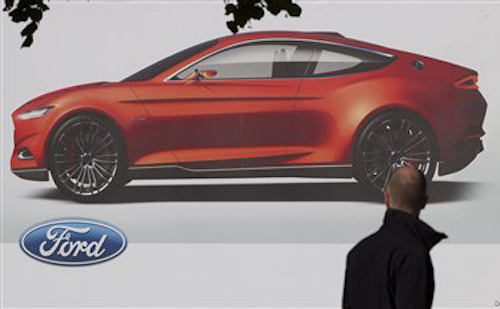 BRUSSELS (AP) -- Ford Motor Co. will close a car plant in eastern Belgium — one of its main European factories — by the end of 2014, a move that will result in 4,500 direct job losses and 5,000 more among subcontractors.

Exactly half a century after construction on the Genk plant started, Ford told a management council there that production was winding down since slumping European sales has forced a restructuring of its plants.

"This is taking us by surprise and is an extremely bitter pill," Christian Democrat union representative Johan Lamers told The Associated Press.

Ford has been under pressure in Europe due to the region's dwindling demand for its models and the overall slide of car sales on the continent due to the debt crisis.

The company expects to lose more than $1 billion this year in Europe, where it gets a quarter of its sales. Analysts say Ford has more factory capacity than it needs.

The plant in Genk makes the midsize Mondeo, the S-MAX minivan and the Galaxy car. Ford said it plans to move the production of all three lines to Valencia, Spain.

"The proposed restructuring of our European manufacturing operations is a fundamental part of our plan to strengthen Ford's business in Europe," CEO Ford of Europe Stephen Odell said in a statement.

Ford has been struggling in Europe.

Figures from Acea, the European carmakers' association, show European market sales have dropped 10.8 percent on a year-by-year basis in September. Ford's drop in sales was 14.9 percent, however.

The announcement came barely a month after Ford had given reassurances about production at the Genk plant, Lamers said.

Ford Genk represents more than 30 percent of the car production in Belgium.

Workers took the announcement early Wednesday with relative calm. A bonfire was set up at the gate of the plant but there was little union action since the factory was in the middle of a three-week layoff because of slack demand.

Roadblocks on bridges and at expressway gates opened, allowing trucks and cars through for the first time in two months.
Joe McDonald
Mar 25th, 2020

Nike Web Sales Up Amid Virus

CEO John Donahoe said the company will follow a similar playbook as the pandemic spreads to other regions.
Associated Press
Mar 24th, 2020

One company has seen a 400 percent increase in inquiries as concerns over the spread of the virus have grown.
Unit 202 Productions
Jeff Reinke
Mar 24th, 2020

Softbank to Buy Back Assets

The company's founder, Masayoshi Son, said the move reflected “the firm and unwavering confidence we have in our business.'
Elaine Kurtenbach
Mar 23rd, 2020

A hedge fund is floating its own candidates for the struggling company’s board.
Mar 23rd, 2020

While household goods are in high demand, the impact on heavy industry has been immense.
Associated Press
Mar 20th, 2020

Auto Plants May Pivot to Medical

GM and Ford are hoping to contribute to addressing the impending medical device shortage.
Mar 19th, 2020

The company expects at-home food demand will remain elevated in Q4 as feedings at restaurants, schools and universities will be down.
Mike Hockett
Mar 19th, 2020