Ill. Manufacturer Asks Romney To Save Their Jobs

But with the presidential election campaign in full swing, workers at the Sensata Technologies plant came up with a novel idea, a Hail Mary pass to save their jobs: Ask Mitt Romney for help. 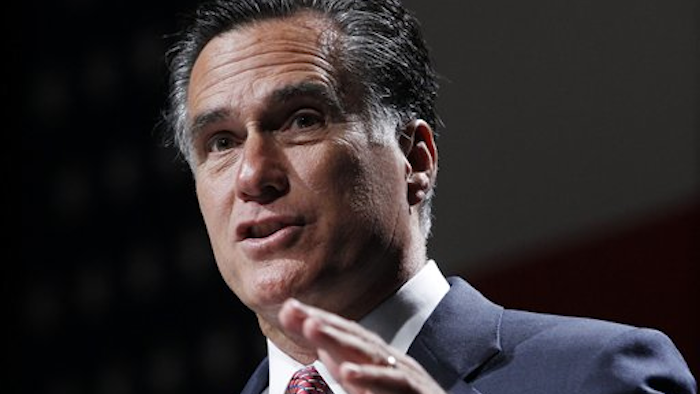 Since early 2011, Cheryl Randecker and her co-workers have known their jobs making electronic sensors at a factory in Freeport, Ill., would be lost to China. Some even were asked to train their replacements, who were flown in from overseas.

But with the presidential election campaign in full swing, workers at the Sensata Technologies plant came up with a novel idea, a Hail Mary pass to save their jobs: Ask Mitt Romney for help.

Sensata is owned by Bain Capital, the private equity investment firm that the Republican presidential candidate once led and that has been the subject of a campaign debate about jobs and outsourcing. Romney had long since left his leadership position at Bain when Sensata bought the plant in 2010, but the Freeport City Council recently passed a unanimous 8-0 resolution calling on him to come visit and help keep the jobs in town. The workers have written him directly.

They've tried to get President Barack Obama involved, too. The mayor, a Democrat, invited both presidential contenders to come to Freeport to debate at the site where Abraham Lincoln and Stephen Douglas tangled in 1858.

People in Freeport, where the high school mascot nickname — Pretzels — alludes to the town's long history of manufacturing, know their attempt to thrust themselves into the presidential campaign is a long shot at best: Neither the Romney camp nor the White House has responded.

But they've been noticed by members of Congress and the national media, and workers who've given up any hope that their jobs will be saved say that at least they're being heard by public officials and others in power.

"I always sat back. You watch the news and think, 'God, I wish I just had interactive TV and could just say what I want to say to them,' " the 52-year-old Randecker said, conceding that the plant almost certainly will close. "This has actually given a lot of people a voice."

Romney's campaign did not respond to a request for comment. But Sensata's spokeswoman, Linda Megathlin, said the company bought the plant from Minneapolis-based Honeywell essentially to get its customers. Most of the plant's revenues are generated in Asia, leading logically to the decision to move to China, she said.

"We clearly recognize that this is very difficult for the employees. We've tried to be clear and transparent with them," Megathlin said. "We've met with employees and we've told them our plans remain the same,"

She noted that layoffs already have started, including 13 on Friday. Sensata says it's paying the workers a week's salary for every year of service.

If nothing else, the soon-to-be-former workers have created a stir. Sen. Dick Durbin, the No. 2 Democrat in the U.S. Senate, hosted some of them on a conference call with reporters related to his push for anti-outsourcing legislation. A pair of Republican congressmen from northern Illinois, Don Manzullo and Bobby Schilling, wrote the company, asking that the plant be kept open.

And the town's story has been too good to avoid for several national news outlets. MSNBC, which hosted an appearance by Freeport Mayor George Gaulrapp, who took advantage of the exposure to propose Obama and Romney debate in his town.

Freeport's economy was built on a foundation familiar in the Midwest: a railroad line to Chicago, a fair share of dairy farming in the countryside and a lot of manufacturing — tires, defense industry components and, long ago, pretzels.

But Freeport and its 25,000 residents has not been spared in the Midwest's shedding of manufacturing jobs.

Newell Rubbermaid, the maker of the Sharpie and a range of other products, moved its headquarters out of Freeport almost a decade ago. Honeywell once employed 3,500 people; it's now down to roughly half of that.

Steve Marten bought his downtown bar, Morts, in 1984, when 2,500 Honeywell employees worked in a massive building just across the street.

"There's nobody over there anymore," Marten said as he poured drinks for the regular crowd of working-class "older guys" that make up most of his daytime business. "It's a four-story, city block-wide building. It's just empty."

There are still sizable local employers — Titan Tires, Honeywell and others. Unemployment in May was 8.6 percent — high but certainly better than nearby counties such as Winnebago and Boone, where more than 10 percent of the workforce is unemployed.

Still, the 170 jobs at Sensata won't be easily replaced, particularly for workers in their 50s and 60s, Gaulrapp said.

Randecker called it "a slap in the face" when small groups of Sensata workers from China were flown in to be trained by the outgoing workers. They were men, she said, and seemed to resent and even ignore instruction from a woman.

As the primary household earner for her and her 20-year-old daughter who works part-time and goes to community college, Randecker doesn't want to give up the Sensata severance package that will include a week's salary for each of her 33 years. So, she has stayed. She doesn't have better options right now, anyway.

Gaulrapp knows Freeport has slim, if any, hope of convincing the company to stay, but said he wants to at least spark a discussion about moving jobs overseas.

The Democrat ran unsuccessfully for Congress in this year's primary and said he backs Obama. But he insists his support of Randecker and the other workers isn't about politics — not Romney's, the president's or his own. His niece is employed at the plant.

"These are relatives, friends and neighbors," he said.