Is ‘Low-Cost’ Manufacturing Headed To The U.S. Next?

A recent survey from Entrada Group posits a rather interesting conclusion: the U.S. is now considered the prime location for low-cost manufacturing, with Mexico a close second, and China falling far behind. 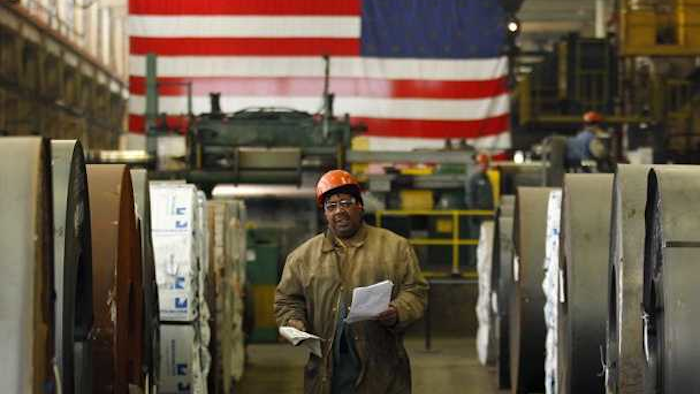 A recent survey from Entrada Group titled “Where in the World?” posits a rather interesting conclusion: the U.S. is now considered the prime location for low-cost manufacturing, with Mexico a close second, and China — once the mecca of cheaply-produced goods — falling behind. It’s a far cry from the trends over the last few decades, in which American consumers saw many of their most commonly-bought items tagged with a “Made in China” label, and in which we lost a great deal of manufacturing jobs as a nation. And because it’s a rather extraordinary claim, it deserves a little more examination.

The survey was conducted between the end of 2013 and through the first quarter of 2014, and consisted mostly of respondents who work at companies in mature markets: U.S. (73 percent), Canada (14 percent) and Europe (8 percent). 62 percent of respondents are VP-level executives or higher, and 95 percent lead companies that manufacture for the North American market. Essentially, a very good cross-section for offering wisdom about the efficacy of manufacturing in North America versus abroad — whether that be China or another “low-cost” market.

To get a view for the current landscape of low-cost manufacturing: China and Mexico were, unsurprisingly, the two most common current locations for cheap production, with “other Asia” and India taking third and fourth place, respectively. For those who are aiming to target Asian companies or consumers, manufacturing in China is usually a necessity, and for many, Mexico services the same role for delivering to the U.S. or Canada. At the same time, 30 percent of respondents said that low operating costs were the most important factor for positioning assets in a low-cost country.

Manufacturers that already operate in two or more locations are overwhelmingly supportive of expanding further into low-cost locations — 67 percent supported such an idea. Respondents with a single location were less bullish, with only 33 percent expecting an expansion into a low-cost country. That different between manufacturers with a single location and those with two or more will become even more important in a moment.

Now, to the bulk of the survey’s results: “Weighing all factors, which location do you consider to be the most attractive for low-cost manufacturing?” Here, 33 percent of respondents said the U.S. was most attractive, followed by Mexico, at 24 percent. China — once known best for cheap production — scrounged up only 14 percent to take a distant third. Companies that manufacture in a single location were most bullish about the U.S. — 46 percent said it was the best destination for low-cost manufacturing — while those with multiple locations were equally weighted between the U.S. and Mexico, with 23 percent apiece.

All of this paints a very positive picture for American manufacturing — with so much enthusiasm, there may be more companies that invest locally rather than across the borders or across the seas, following in the “reshoring” trend that has become increasingly popular in the last few years.

It’s not enough to know that companies see the U.S. as an attractive low-cost location. It’s also critical to understand why that trend is emerging. And those reasons just might be even more compelling.

When asked about why companies picked certain low-cost manufacturing locations, 30 percent cited low operating costs as the most critical factor, followed by high-quality production at 16 percent. The 27 percent who stated “other” said the location decision was based largely on customer needs, such as the need to be within a close proximity. Supply chain reliability and proximity to North American markets were last on the list with 14 and 13 percent, respectively. And largely, those factors mirror the increased labor costs in China and a desire to simplify supply chains.

Doug Donahue, the vice president of business development with Entrada Group, says, “With labor costs rising in the Far East, it isn’t surprising that companies are considering production locations in their own backyard. Additionally, for the past decade or so, manufacturers have seen increased pressure to produce in the same region where their product is sold. Thus, for many manufacturers, the U.S. is becoming more attractive due to rising costs in China coupled with this trend of regionalization.”

Beyond that, these companies — of which 73 percent are headquartered in the U.S. — prefer North America largely because of previous business interactions there (38 percent) or personal visits and/or experience (27 percent). It’s a lot easier to get a sense as to how production will work, and the people who will help run it, when that’s in a familiar country, or at least one that can be easily traveled to.

In many ways, it seems as if there is a convergence occurring between the general preference to manufacture in familiar locations (i.e. America) crossed with the improved cost picture. In fact, the consulting firm AlixPartners, in their2013 Manufacturing-Sourcing Outlooksurvey, says that by 2015, the cost of manufacturing in China will be more or less equal to that in the U.S., all factors considered. The capacity to simplify supply chains, be closer to the customer and not spend a fortune on domestic manufacturing (at least compared to China) may very well win many companies over.

While Mexico may still win out on labor costs — Donahue says Mexican manufacturing offers “fully fringed labor costs that can be as low as $1.50 per hour” — there seems to be a small consensus among manufacturing executives that they prefer working in locations they’re most familiar with. AlixPartners seems to agree, saying “the United States has reached parity with Mexico as a preferred nearshoring location,” and considering the trend has, for the last few years, tipped toward Mexico, all the recent numbers are promising.

All this is to say that the decision to manufacture anywhere in the world is one that should be taken on a case-by-case basis, and not solely on wider trends. AlixPartner warns, “Companies should look twice before they leap. Not only do product-cost variables vary widely by product type but several factors such as exchange rates, materials costs, and labor agreements can have dramatic impact on the outcome as well.”

A good example of product-cost variables: some types of manufacturing, such as consumer electronic goods, may benefit from manufacturing in China, a field over which the country still “reigns supreme,” according to Entrada Group.

The survey also points out another consideration, and that’s the success companies are actually finding in moving to low-cost manufacturing locations. Entrada Group says, “Companies that expanded to a ‘low-cost manufacturing location’ achieved their goals to a large extent just half of the time, with half realizing just moderate savings or worse.” What does this mean? Perhaps it's a signal that it's more important to locate a facility for stability, quality or being close to a customer rather than hinging the investment on low operating costs.

That could be good news for the U.S. regardless — some may perhaps choose to remain here, or reshore here, and find that the cost picture isn’t as rosy as they had hoped. Even in that situation, they’ll gain all the other intangible benefits of domestic manufacturing — which, in many cases, outweigh the cost of production. All of that seems to readily answer the question the survey asks —" where in the world" is manufacturing headed next — with a resounding call for making more goods in North America, if not more selectively in the U.S.

Read more about the Entrada survey: “Where in the World?”

Japan to Boost Space Cooperation with US

Elon Musk previously told workers they didn’t have to return to the plant if they weren’t comfortable with it.
Jul 2nd, 2020

The job market improved for a second straight month, yet remained far short of regaining the colossal losses it suffered this spring.
Jul 2nd, 2020

The company warned of more thin years ahead.
Jun 30th, 2020
Follow Us
Most Recent