Mixing It Up the KitchenAid Way

Every KitchenAid stand mixer in the world is built in this Greenville, OH facility. Find out what goes into building an iconic product that has stood the test of time. 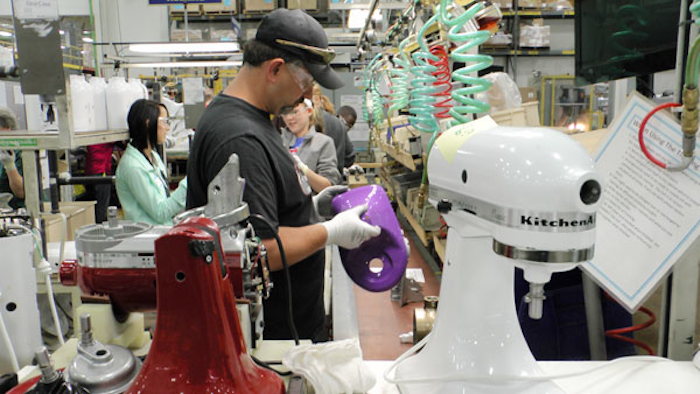 Every KitchenAid stand mixer in the world is built in this Greenville, OH facility. Find out what goes into building an iconic product that has stood the test of time.
This article originally appeared in the July print issue of IMPO. To view the full story, including a side bar on quality, click here.

For generations, home cooks and professional chefs around the world have relied on KitchenAid mixers for their cooking and baking needs. The brand, known for its quality and dependability, has stood the test of time. KitchenAid began producing its legendary stand mixer in 1919 and it hasn’t looked back.
In 1986, KitchenAid was purchased by Whirlpool Corporation from Dart and Kraft. Shortly thereafter, Whirlpool began to expand its brand footprint throughout Europe, Latin America, Asia and parts of Africa. Recently, however, the company has received attention for bringing back some of the KitchenAid production from China to Greenville, OH.
In the small community of Greenville, KitchenAid stand mixers and hand mixers are built in a 257,000 square foot manufacturing facility that employs almost 1,000 people from the area. And this number has grown nearly 15 percent each year over the past several years.
“These numbers have really followed our growth pattern over the last five years. Our sales have grown 10 to 15 percent each year, and our employee base has really grown to match that,” says Corby D. Schroeder, Lean manufacturing manager, Greenville Division. In 2013, these employees made more than 2.5 million stand mixers – enough to fuel a lot of culinary adventures. In fact, every KitchenAid stand mixer in the world is made here.
To Schroeder, the workers are a key to KitchenAid’s competitive advantage. “You can build a product anywhere in the world, but you can’t find people who care more about a product than what you find here in Greenville,” he says.
This passion is evident on the plant floor. Bill Clopp, a 26-year-veteran at the facility, works in plant maintenance. His team is made up of 18 people across three shifts, and Clopp’s been a part of it since the 1980s. He says he’s stayed so long because the associates at the facility truly have their hearts in the product.
Tammy Phillips, a trainer at the facility, has been with the company for 14 years. She loves the working environment, company culture and the opportunity to teach people a new skillset.
Gail Bierly, the most veteran member we spoke to, has given more than 40 years to KitchenAid. To Bierly, the ability to work on an iconic product while receiving great benefits has kept her with the same company for so many years.
Aside from the retention of their workforce, the camaraderie between the senior leadership team and the associates is also apparent on the shop floor. According to Kenneth R. Hossler, plant leader at the Greenville plant, it's because every member of the leadership team is present on the floor every day.
Not only does this constant presence improve the team mentality of the facility, but it allows leadership to ensure quality standards are always met. In fact, as far as Hossler could remember, they've never issued a recall on the stand mixer.
“Quality is not a quality department’s function – quality is everyone’s function,” says Hossler. “If we have a quality issue, it’s not a quality department’s problem, it’s a Greenville opportunity. Every time we do a Lean event, part of it is focused on safety, quality, delivery and cost – in that order.”
And according to Schroeder, Lean at KitchenAid isn’t just a big initiative or an event. “We want it to be day in and day out and shop floor focused. Whirlpool is a continuously improving organization. There are challenges and business initiatives that we need to meet, but there are a million ways you can pursue those improvements. We give our associates those challenges and allow them to drive the improvements in the path that makes the most sense for them.”
Built in the USA

Recently, some of these challenges and opportunities have been spurred by Whirlpool’s decision to reshore some production from China and Mexico to the Greenville facility.
According to Hossler, bringing production of the KitchenAid hand mixer back from China was an easy decision for Whirlpool. “We are in the heart of the marketplace. We are a global company and we’re growing globally, but about 70 percent of the product is built for the U.S.”
To be classified “Made in the USA” companies must follow stringent guidelines. According to Hossler, they have never done a breakdown of what percentage of the final product materials and man hours are sourced from America, but he says the vast majority of the weight of the product certainly is. “The calculation is really complicated, so a lot of companies don’t claim that anymore – they just say designed and built in the USA, which our products are. Our earning model is ‘Invested in America, and designed and built in the USA.’”
The hand mixer, which was once produced in China, returned to America in July 2012. Hossler says that they are producing close to 900,000 hand mixers per year in Greenville for less than what they were made for in China, and at a higher quality than ever.
Much of this cost cutting is in the form of logistics savings. “When you’re insourcing things, you have duties that you’re paying, taxes for product that is being built in China and transportation costs,” says Hossler.
He adds that, “Whirlpool has primarily focused on being a U.S. manufacturing based company. A lot of companies, several years ago, fled to Mexico or overseas. Whirlpool’s core concentration and core focus has been to invest in the U.S.” The corporation has five facilities in Ohio that employ a combined 10,000 employees. Nationally, more than 15,000 people work for Whirlpool Corporation.
“I’m pretty proud to work for a company that has kept that at the core,” says Hossler. He attributes this emphasis to a strong, stable leadership team.
“Whirlpool has been a conservative company when it’s needed to be. Overall, our leadership has had a very good vision of where they want to take us and I think they stay true to that. In 2008, when we were going through the recession, it was a time when we got pretty conservative and we had to buckle down, weather the storm. We didn’t give up. We didn’t panic,” says Hossler.
Recruitment and Training
This leadership team has grown from external recruitment and from investing in associates working on Whirlpool Corporation production lines. Hossler, for example, started working on the production line 28 years ago. “The nice thing about Whirlpool, for me, was that they paid for my college. If you’re on the assembly line and you want to take a business course or get an engineering technology degree, Whirlpool will pay for it.”

Schroeder is also a product of Whirlpool’s development culture. “I started in the leadership development program,” he explains. “It’s a three year rotational program where you move from role to role each year, to a distinctly different facility and opportunity. At the end of those three years, you can evaluate some of the jobs that are open with Whirlpool and ultimately interview for them.” Schroeder is a graduate of the company’s manufacturing program, but they also offer programs in supply chain, finance and engineering, and up to 60 students participate each year.
While he didn’t know he wanted to start a career in manufacturing, Schroeder says he’s always had a passion for American made products. “I think for a lot of people that go into manufacturing, that’s one of the things that really brings a lot of pride to your job. You can see what’s being made at the plant, and then you can walk into a store where it’s being sold.”
But at 27-years-old, Schroeder says only a few of his peers were interested in manufacturing. “I think it’s an exposure problem. Going through my college courses at Ohio State, I was in electrical engineering and you really had no exposure to manufacturing. Until I had a real life application in manufacturing, I really didn’t know what it was about. If you’re really trying to close the skills gap, you need to give people the opportunity to understand manufacturing, and give them the opportunity to see it and live it.”
As a company, Whirlpool is hoping to help address some of these manufacturing perception problems. Currently, it is working with Darke County (the home of the Greenville plant) on workforce development to ensure that individuals are being taught the skills needed for manufacturing jobs. They’ve also done tours for high school students to introduce them to the field and to give them a more realistic image of what a career in manufacturing can look like.
“Manufacturing for some reason has gotten a bad rap. Getting kids and people right out of high school to be attracted to the manufacturing world today is a lot different than it was when I was growing up,” says Hossler.
But in Greenville, at least, they are making a difference. The very small community depends on the KitchenAid factory for survival, and the trend of bringing back production jobs to the area to meet growing demand can only be a good one. And as the team ramps up for it’s busiest season following July 4, the facility will be running around the clock, building an American classic with no signs of slowing down.
For more news and opinions from Tia Nowack, subscribe here and follow her on Twitter at @TalesFromTia.
Latest in Global