That means another delay for a highly anticipated pickup. 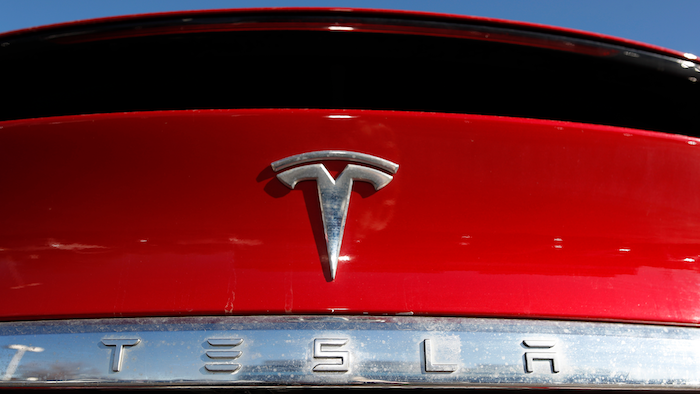 DETROIT (AP) — Tesla Inc. on Wednesday posted record fourth-quarter and full-year earnings as deliveries of its electric vehicles soared despite a global shortage of computer chips that has slowed the entire auto industry.

Although the company predicted it would be able to build 50% more vehicles than it made last year, CEO Elon Musk said the chip shortage would stop the company from rolling out any new models in 2022. That means another delay for the Cybertruck pickup, which was originally scheduled to go on sale last year.

Musk also said Tesla isn't yet working on a promised $25,000 small electric car, but it will.

“We have enough on our plate right now, quite frankly,” he said.

And Musk said the company is looking at building additional factories and will offer an update on locations later in the year.

The Austin, Texas, company made $5.5 billion last year compared with the previous record year of $3.47 billion in net income posted in 2020. Musk said the annual profit pushed the company's accumulated earnings since its 2003 inception into profitable territory.

Last year was a breakthrough year for the company, Musk said on a conference call with analysts.

“There should no longer be doubt about the viability and profitability of electric vehicles,” Tesla said in a letter to shareholders.

Musk said factory output was constrained last year as the company focused resources on modifying vehicles and manufacturing to deal with the chip shortage and other supply-chain problems that will persist this year. A lot of engineering work and factory tooling are under way to produce the delayed Cybertruck, Semi and a new Roadster, which he said he now hopes to be ready for production next year.

If were to Tesla start building new vehicles this year, fewer vehicles would be delivered as attention and resources go to the new model, he said.

Tesla said it started building Model Y SUVs late last year at its new factory near Austin with more advanced battery cells. After final certification, it plans to start delivering them to customers. The company said it’s testing equipment at its new factory in Germany, and is still trying to get a manufacturing permit from local authorities.

The company said that its "Full Self-Driving” software is now being tested on public roads by owners in nearly 60,000 vehicles in the U.S. It was only about 2,000 in the third quarter. The software, which costs $12,000 and cannot yet drive itself, should accelerate Tesla’s profitability, the company said.

Musk said he'd be shocked if the software can't drive more safely than humans this year, although he dodged a question about whether the company would reach full autonomy in 2022. Currently Tesla says “Full Self-Driving” is a driver-assist system and drivers must be ready to intervene at all times.

In 2019, Musk predicted a fleet of autonomous Tesla robotaxis on the roads by the end of 2020.

U.S. safety regulators are looking into a complaint about the safety of “Full Self-Driving,” and they also are investigating why Teslas operating on a less sophisticated partially automated system called “Autopilot” have repeatedly crashed into parked emergency vehicles.

In the fourth quarter, Tesla made $2.32 billion. Excluding special items such as stock-based compensation, the company made $2.54 per share. That beat Wall Street expectations of $2.36 per share. Revenue for the quarter was $17.72 billion, also ahead of analysts’ estimates of $17.13 billion, according to FactSet.

It also said Musk was awarded $245 million in the fourth quarter because he reached some operational milestones in his compensation package.

The company said it was able to drive cost reductions in the final quarter of the year, as well as grow vehicle sales. But Chief Financial Officer Zachary Kirkhorn cautioned that starting up the Austin and Berlin factories, plus pressure from commodity price increases and supply chain costs, will add to Tesla’s costs this year.

Tesla's shares initially tumbled in extended trading after the earnings were announced but then recovered and were down less than 1%. The stock closed Wednesday up 2% to $937.41.