The sensor uses passive sweat, which means that the wearer does not need to engage in physical activity. 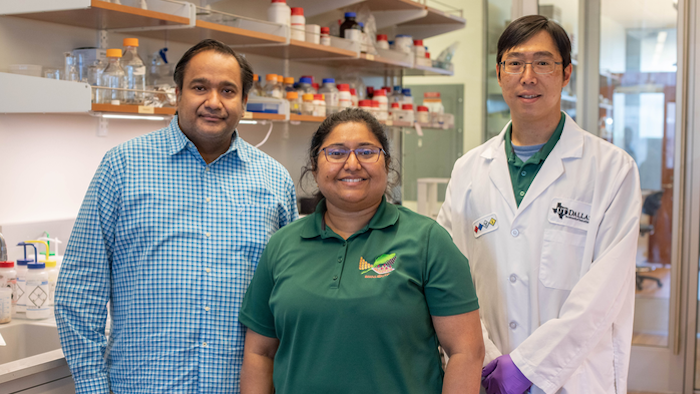 From left: Dr. Sriram Muthukumar, co-founder of EnLiSense LLC; Dr. Shalini Prasad, head of bioengineering and the Cecil H. and Ida Green Professor in Systems Biology Science; and bioengineering research scientist Dr. Kai-Chun Lin are part of the team working on the sweat sensor.
The University of Texas at Dallas

University of Texas at Dallas bioengineers in collaboration with EnLiSense LLC have designed a wearable sensor that can detect two key biomarkers of infection in human sweat, a significant step toward making it possible for users to receive early warnings of infections such as COVID-19 and influenza.

The Erik Jonsson School of Engineering and Computer Science researchers’ study, published online March 3 in Advanced Materials Technologies, demonstrates that the sweat sensor can identify the biomarkers interferon-gamma-inducible protein (IP-10) and tumor necrosis factor-related apoptosis-inducing ligand (TRAIL). Elevated levels of IP-10 and TRAIL indicate what is known as a cytokine storm, a surge of pro-inflammatory immune proteins generated in the most serious infections.

“Our work is pioneering since, until this date, it was unclear whether these molecules were present in sweat,” said Dr. Shalini Prasad, head of bioengineering and the Cecil H. and Ida Green Professor in Systems Biology Science. “We established that our low-volume passive sweat technology is indeed able to measure these biomarkers.”

The ability to detect IP-10 and TRAIL is important because, in addition to C-reactive protein (CRP), they allow diagnosticians to distinguish between viral and bacterial infections. The research builds on a study that Prasad’s team presented at the April 2021 meeting of the American Chemical Society that demonstrated that the sweat sensor could detect CRP to indicate an impending cytokine storm. A molecular test, such as a polymerase chain reaction (PCR) test, would still be needed to confirm the type of pathogen causing an infection, Prasad said.

“We have built a technology to unlock and explore the latest frontier in sweat diagnostics,” Prasad said. “This sweat-based, wearable technology from EnLiSense is truly transformational in that it can measure and report human host response messenger molecules associated with inflammation and infection in a real-time and continuous manner.”

The sensor uses passive sweat, which means that the wearer does not need to engage in physical activity or have their sweat glands expressed to generate a sample. Real-time continuous monitoring is possible as sweat is collected on a removable strip, which must be changed daily.

In this study, the researchers collected sweat from 18 healthy people who wore the sensor. They also drew blood from the subjects and compared the results.

Researchers next plan to evaluate the sensor in clinical studies with patients experiencing respiratory infections.

The first author of the study is Badrinath Jagannath PhD’21, who received a first-tier David Daniel Thesis Award from the Office of Graduate Education for his research on the sensor technology. He recently became a postdoctoral research fellow at the Wyss Institute at Harvard University.

This project has been funded by a contract (HHSO100201800026C) awarded to EnLiSense LLC as part of the DRIVe initiative (Division of Research, Innovation, and Ventures), which was established by the Biomedical Advanced Research and Development Authority, part of the Assistant Secretary for Preparedness and Response within the Department of Health and Human Services. 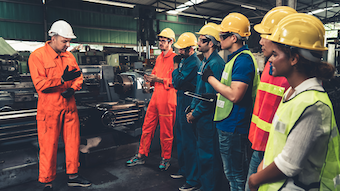 Relationships Between People and Equipment

Co-founders of a training, consulting and coaching organization share their experiences.
Apr 28th, 2022
Follow Us
Most Recent