They say the Justice Department violated a victims' rights law by not consulting with them before reaching the settlement. 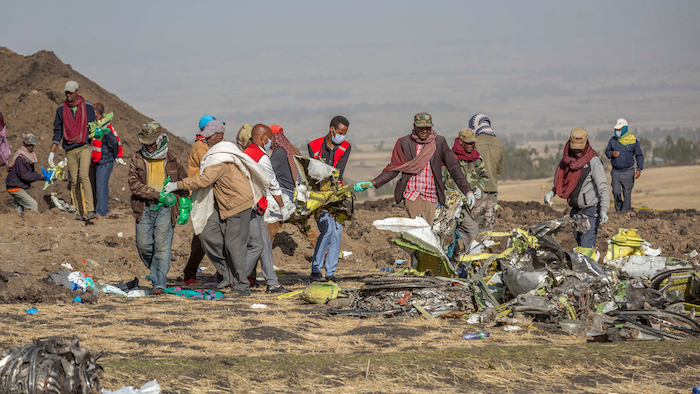 Relatives of passengers who died in crashes of Boeing 737 Max jets are pressing Attorney General Merrick Garland to help them re-open a settlement that shielded Boeing from criminal prosecution for misleading federal safety regulators about the plane.

Several family members and their lawyers held a video meeting Wednesday with Garland. They told the attorney general that the Justice Department violated a federal law by not informing them before finalizing the settlement in January 2021, two weeks before the Trump administration left office.

Garland expressed sympathy to relatives who spoke during the meeting but made no promises or substantive comments on the case, according to participants.

Last month, the families of more than a dozen passengers filed a motion in federal court in Fort Worth, Texas, alleging that the Justice Department violated a 2004 victims' rights law by not consulting with them before reaching the settlement, which shielded Boeing from criminal prosecution. They are also seeking documents that the department gathered during its investigation.

Michael Stumo, whose 24-year-old daughter Samya was killed in the 2019 crash of an Ethiopian Airlines Max, said passengers' relatives were blindsided and “erupted in anger, shock and renewed grief” when the settlement was announced.

“We don't think they could have gotten this deal through if they had allowed us to have any input and knowledge,” he said.

Stumo and two relatives of other passengers spoke during the meeting. Their lawyer, Paul Cassell, a former federal judge, argued that failing to inform families ahead of time made the settlement illegal.

They asked Garland to support their legal argument that the Trump administration's Justice Department violated a crime-victims' law. Cassell believes that if a court accepts that argument, it could invalidate the agreement. The family members, however, stopped short of asking Garland for a specific outcome, such as whether negotiations with Boeing should start over.

Several high-ranking Justice Department officials in Washington and Texas also attended the meeting. The department did not immediately respond to a request for comment. Boeing also declined to comment.

In all, 346 people were killed in two Max crashes, the first in Indonesia in 2018, and another five months later in Ethiopia. All Max jets were grounded worldwide for nearly two years. They were cleared to fly again after Boeing overhauled an automated flight-control system that activated erroneously in both crashes.

In the January 2021 settlement, Boeing blamed two former test pilots for misleading the Federal Aviation Administration about the flight-control system before regulators approved the plane in 2017. The Justice Department agreed to drop a criminal charge of conspiracy to defraud the government if Boeing follows terms of the deal for three years.

Nearly $1.8 billion of the settlement money was set aside for airlines that lost money because their planes were grounded. Another $500 million went into a fund for victims’ relatives, and Boeing agreed to pay a $243.6 million fine.

Naoise Connolly Ryan, whose husband Mick died in the second crash, called the deal "a slap on the wrist that wrongly holds no executive accountable.” She also spoke to Garland during Wednesday's meeting.

Since the settlement, one of the former Boeing test pilots, Mark Forkner, has been charged with fraud.

The conspiracy used confidential data to give certain sellers an advantage.
May 17th, 2022

The plane lost power and burst into flames after crashing.
May 16th, 2022

In the process of taking off, the flight crew discovered an abnormality in the craft.
May 12th, 2022

Including those labeled 'nontoxic' and 'green.'
May 4th, 2022
Follow Us
Most Recent