It appears inclined to keep it for health workers, but not the wider workforce. 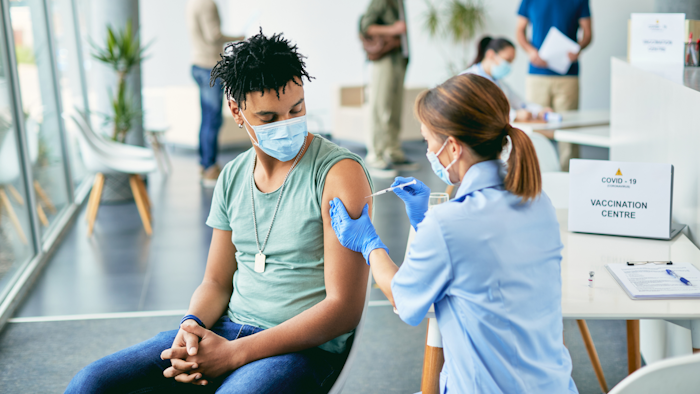 Conservative justices on the Supreme Court appeared to signal a belief that the Biden administration may have overreached in ordering private companies to require that staff be vaccinated or subject to regular testing. But a separate requirement that health care workers at institutions receiving federal funds be immunized may be judged to be on firmer legal ground.

Oral arguments over just how far the federal government can go to require employees to get vaccinated came before the Supreme Court on Jan. 7, 2022. The cases, NFIB v. OSHA and Biden v. Missouri, come at a critical time: A surge of COVID-19 cases resulting from the highly contagious omicron variant has put added pressure on workplaces and hospitals across the nation. And arguments took place just days before OSHA’s key mandate is due to come into effect on Jan. 10.

As a law expert who has closely followed the treatment of vaccine mandates in the lower courts, I envision a divided court issuing decisions soon. Although oral arguments are not a solid predictor of how the court will rule, justices seemed to be moving toward allowing vaccine requirements for health care workers but curbing federal powers to implement a broader mandate affecting the wider workforce.

The oral arguments in front of the justices related to two vaccine mandates put forward by the Biden administration.

The first, issued by the Occupational Safety and Health Administration, requires that all employees at private businesses with 100 or more staff be vaccinated or submit to regular testing. The OSHA ruling affects more than 80 million American workers.

The second, issued by the Centers for Medicare and Medicaid Services, requires that over 10 million health care workers at CMS-funded providers be vaccinated.

Enforcement of both mandates is held up in specific states following decisions in lower courts, and is awaiting final rulings by the Supreme Court.

How did we get to this point?

Federal vaccine mandates are seen by the Biden administration as a linchpin in the national strategy to quell the pandemic, which has now taken over 833,000 American lives.

Since their introduction on Nov. 5, 2021, the OSHA and CMS vaccine mandates have faced extensive judicial challenges by mainly Republican states.

Federal appellate courts had different opinions on the legality of OSHA’s mandate, ultimately allowing it to take effect through a unified decision in the 6th Circuit Court of Appeals.

Lower federal district courts in several states determined that the CMS vaccine requirement should be set aside. Based on multiple appeals, the Supreme Court agreed to hear the cases in two consecutive oral arguments.

The question before the court now is not whether mandates work to get people vaccinated – we know that they do. Rather, the central question in front of the justices is whether the federal government, as opposed to states, can actually implement them.

States’ abilities to mandate vaccines as a condition of employment, school attendance or admission to certain events are largely unquestioned and have been confirmed in lower-court rulings. Provided exemptions are allowed those who are medically unfit, or religiously opposed in many jurisdictions, state-based vaccine mandates are constitutional. Such was the Supreme Court’s decision in Jacobson v. Massachusetts, which affirmed in 1905 the constitutionality of a local vaccine mandate to counter a smallpox outbreak in Cambridge.

The issue is that not all states approve COVID-19 vaccine mandates. From the onset of the coronavirus pandemic, largely conservative-leaning states, including Arizona, Florida and Texas, prohibited them. Residents could choose to be vaccinated, but no one was going to be forcefully inoculated.

Losing patience with contrary state approaches and a minority of Americans steadfastly refusing vaccination, President Biden determined in September 2021 that federal employees, members of the military and contractors would be required to be vaccinated.

These mandates faced their own judicial challenges. The contractor rule, affecting millions of workers at federally supported enterprises, has been stalled in multiple courts.

Central to cases in front of the Supreme Court now is the question of whether the federal government has the authority to impose a vaccine mandate on large employers, regardless of the public health benefits.

Resolution of these issues will prove pivotal in the court’s forthcoming decision.

The legal issues at stake in Biden v. Missouri challenging CMS’ vaccination mandate for health care workers presented an “easier case,” noted Roberts. The reason is simple: In crafting its mandate, CMS relied on a slate of existing legally approved statutory authorities that allow the center to set terms of provider participation in furtherance of patient safety and health.

Hospitals and other providers were largely in favor of CMS’ vaccination mandate.

It was conservative states and localities like Missouri and Kentucky that objected, on grounds that CMS exceeded its conditional spending powers.

Kagan insisted that requiring vaccinations to curb risks to patients and workers in hospitals and other health care settings was logical and consistent with its legal duties.

Opposing counsels and Gorsuch suggested otherwise. They argued that CMS failed to provide adequate notice and and attempted to “commandeer” health care workers in violation of federal statutes and principles of federalism.

With enforcement of the OSHA standard due to start on Jan. 10, 2021, the court may issue a rapid decision, or it could provide a temporary stay. A third option is to simply do nothing and allow the vaccine mandate to take effect.

Justice Stephen Breyer repeatedly questioned how the court could issue a stay under the “public’s interest” at a time when hundreds of thousands of Americans are being infected daily and hospitals are filling to capacity.

Other justices seemed inclined to stall enforcement of OSHA’s standard while mulling over their arguments.

CMS’ rule has a more generous enforcement timeline, allowing more time for health care providers to comply without penalties. Consequently, the court has more time to finalize and issue its decisions regarding its legality.

Could the court restrict the federal government’s capacity to issue vaccination requirements? It is possible.

Over the course of the pandemic, the Supreme Court has repeatedly struck down public health measures on constitutional grounds. Even if CMS’ vaccine mandate looks likely to stay, the court’s conservative justices’ concerns about overreach of OSHA’s authorities are telling.

Skeptical justices are weighing their concerns of federal overreach against the deadliest public health threat to ever confront the nation.

This article is republished from The Conversation under a Creative Commons license. Read the original article here: https://theconversation.com/supreme-court-considers-derailing-federal-vaccine-mandates-appears-inclined-to-keep-for-health-workers-but-not-wider-workforce-174461.