Opponents are seeking to hold a referendum on the long-delayed project. 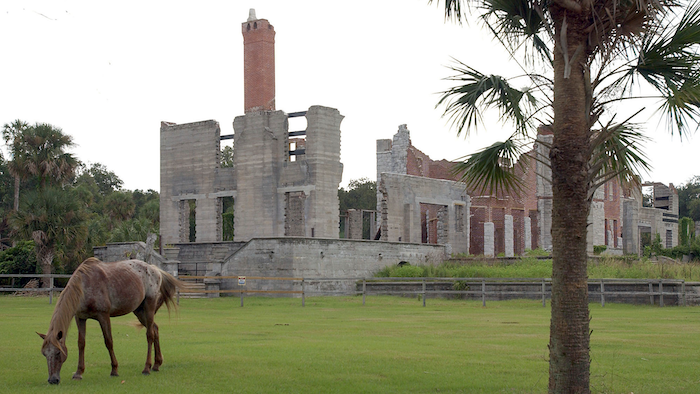 A wild horse grazes next to the ruins of the Dungeness mansion on Cumberland Island, Camden County, Georgia, Sept. 20, 2008.
AP Photo/Chris Viola, File

WOODBINE, Ga. (AP) — Opponents of a planned commercial spaceport on the Georgia coast asked a judge Tuesday to stop local officials from buying land for the commercial launchpad as they seek a special election that would let voters decide whether the deal should happen.

The attorney for coastal Camden County argued that a court-ordered delay could cause the seller of the 4,000-acre (1,600-hectare) property to back out, effectively ending county officials' decadelong efforts to join the commercial space race after spending more than $10 million on the project.

“It could kill this deal,” John Myers, the county's attorney, told the judge. “We will have a $10.3 million bill that we have paid over the past nine years that we will never recoup. And we will have ended the spaceport project here in this courtroom.”

Officials in the county of 55,000 at the Georgia-Florida line have spent years pursing Spaceport Camden, calling it a “once-in-a-generation” opportunity that would boost the economy not only by launching satellites into orbit, but also by luring supporting industries and tourists.

Opponents say there's no guarantee the project will deliver economic growth, and that the proposed location poses threats to nearby barrier islands. Critics, including the National Park Service, say the county’s plan to launch small rockets over two barrier islands pose a risk of explosive misfires that could rain fiery debris onto Cumberland Island, a federally protected wilderness visited by about 600,000 campers and tourists each year.

Despite those concerns, the Federal Aviation Administration granted the county a license Dec. 20 to build and operate what would be the nation's 13th commercial spaceport. The FAA noted in a letter that further reviews and a separate license would be needed before the spaceport could launch rockets — and said there's no guarantee that launches would be approved.

Now spaceport opponents are trying to stop the project at the ballot box. Petitions filed with a probate judge last month call for a referendum that would let local voters decide whether or not Camden County buys the property — a former industrial site — on which it wants to build the spaceport.

Georgia's constitution allows for special elections on local issues if 10% of a county's registered voters sign a petition. A conservation group that collected signatures in Camden County says it got more than 3,800 people to sign — more than meeting the threshold in a county of fewer than 35,000 registered voters.

Paul Harris, a county resident and former airline pilot, is one of the petition signers who filed suit in Camden County Superior Court to halt the land purchase until either the spaceport referendum is held or gets denied. He testified Tuesday that he doubts the project will bring economic growth and believes the county is wasting taxpayer money.

“There are many more hurdles and tens of millions more dollars to be spent before there could ever be a launch there,” Harris said. He added: “Have a referendum and let the taxpayers decide."

Georgia gives 60 days for a probate judge to review the petitions and decide if they meet requirements for a special election. If so, the referendum would be held 30 days later — by mid-March in the case of the Camden County petition.

Dana Braun, an attorney for the petition signers, said allowing Camden County to buy the spaceport property before people could vote would infringe on their rights to a referendum under Georgia's constitution. Myers, the county's attorney, said the petitioners shouldn't be allowed to delay the project because they waited until the last minute.

County officials say their purchase option with the land's current owners expires Thursday. And though the agreement has been extended three times previously since 2015, there's no guarantee the landowner will agree to do so again, said Steve Howard, Camden County's government administrator.

Howard told the judge there have been discussions between attorneys for the county and the landowner about the purchase option, but “I can't say it will or it won't be extended.”

Scarlett said he plans to rule by Jan. 23. A temporary injunction will keep the land purchase on pause until then.