EPA Sets Timeline to Weigh Next Steps for Pebble Mine 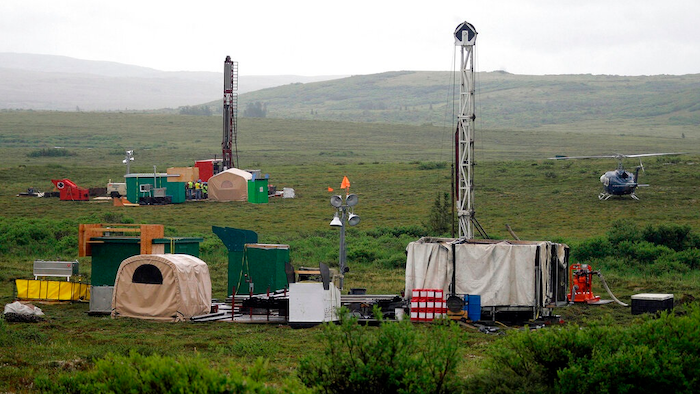 Workers with the Pebble Mine project test drill in the Bristol Bay region of Alaska, near the village of Iliamma, on July 13, 2007. The U.S. Environmental Protection Agency announced Wednesday, Nov. 17, 2021, it is extending through May a timeline to decide how or whether to proceed with proposed restrictions on mining in Alaska's Bristol Bay region, which is known for its salmon runs.
AP Photo/Al Grillo, File

JUNEAU, Alaska (AP) — The U.S. Environmental Protection Agency announced Wednesday it is extending through May a timeline to decide how or whether to proceed with proposed restrictions on mining in Alaska's Bristol Bay region, which is known for its salmon runs.

Acting Regional Administrator Michelle L. Pirzadeh, in a written notice, said an extension through May would allow time “to consider available information in order to determine appropriate next steps, which may include revising” restrictions that were proposed but never finalized under the Obama administration.

The company subsequently filed a permit application with the U.S. Army Corps of Engineers.

In 2019, during the Trump administration, the EPA withdrew the proposed restrictions, removing what it called an “outdated, preemptive proposed veto of the Pebble Mine.”

That action was challenged in court, and the EPA earlier this year asked a judge to vacate the withdrawal decision and send the matter back to the agency for further consideration. The request was granted.

The EPA said the ruling reinstated restrictions proposed in 2014 and triggered regulatory deadlines to either withdraw the proposed restrictions or prepare a so-called recommended determination that would seek to prohibit or restrict activities in an area. The EPA said it can extend the deadline through a notice in the Federal Register and has chosen to do so. The new deadline is May 31.

The Pebble partnership on Wednesday cited the corps' environmental review and said the EPA “did not have this significant volume of detailed technical information" when it took action previously. The company also said the nation will need minerals the Pebble project could provide.

Nelli Williams, Alaska director of Trout Unlimited, said the timeline laid out Wednesday shows a “strong commitment” by the EPA “to follow through and finish the work started in 2014” to provide protections for the Bristol Bay region.