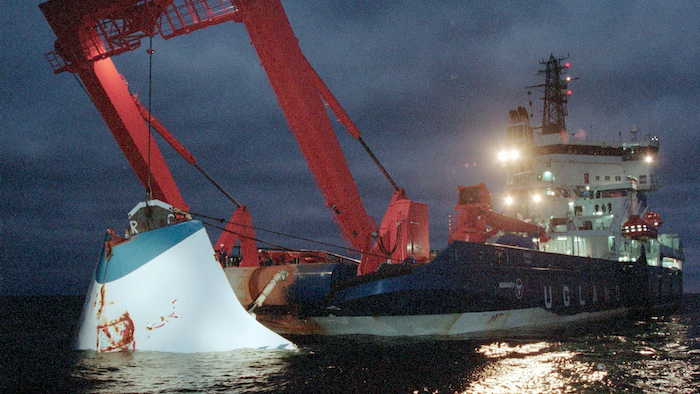 In this Nov. 19, 1994 file photo, the bow door of the sunken passenger ferry M/S Estonia is lifted up from the bottom of the sea, off Uto Island, in the Baltic Sea, near Finland. A privately-funded expedition, commissioned by relatives of the victims of the M/S Estonia ferry that sank into the Baltic Sea nearly 27 years ago, will dive into the vessel’s wreckage this month, Sept. 2021.
Jaakko Aiikainen/Lehtikuva via AP, File

HELSINKI (AP) — A privately-funded expedition, commissioned by relatives of the victims of the M/S Estonia ferry that sank into the Baltic Sea nearly 27 years ago, will dive into the vessel’s wreckage this month.

It's the latest attempt to gain more insight into one of Europe’s worst peacetime maritime disasters.

The goal of the dive, organized by a Estonia-based fund, “is to find answers to questions” that official joint and separate investigations by Estonia, Finland and Sweden have failed to provide on the vessel’s fate, the organization said Wednesday.

“Although during these decades numerous different investigations have been carried out, they have not been able to give the survivors and close relatives of the deceased exhaustive answers regarding the reason why Estonia perished,” the Mare Liberum fund, created in July, said in a statement.

The M/S Estonia ferry, which was traveling from the Estonian capital Tallinn to Stockholm in Sweden, sank in heavy seas on Sept. 28, 1994, killing 852 people, most of them Swedes and Estonians. Only 138 passengers survived.

The Mare Liberum fund, which has backing from victims’ relatives groups in Estonia and Sweden, said it would organize the two-week dive expedition for late September. The project is headed by Margus Kurm, a former Estonian state investigator into the ferry’s sinking, and it is estimated to cost 800,000 euros ($946,000).

The wreck of the M/S Estonia lies on the seabed 80 meters (264 feet) below the surface in international waters near the Finnish island of Uto. The wreck is considered a graveyard, which gives the area protection under the law.

It wasn’t immediately clear what kind of stance the governments of Estonia, Finland and Sweden would take about the private expedition, which rivals an official dive by Estonian and Swedish authorities that is expected in 2022.

The 1997 official joint investigation by Estonia, Finland and Sweden concluded that the ferry sank as its bow door locks failed in a storm. That separated the bow door from the vessel, causing extensive flooding of the decks that eventually sank the vessel in just 20 minutes.