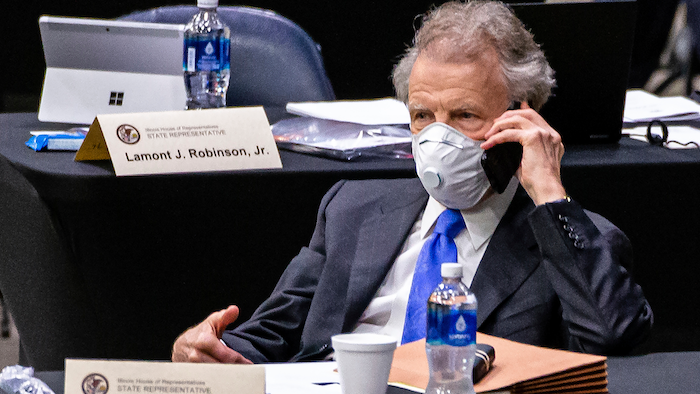 Madigan, who also serves as chairman of the Democratic Party of Illinois, denied wrongdoing through a party spokeswoman, who said he received subpoenas for documents Friday morning.

“He will cooperate and respond to those requests for documents, which he believes will clearly demonstrate that he has done nothing criminal or improper,” spokeswoman Maura Possley said in a statement.

Federal prosecutors said electric utility ComEd has agreed to pay $200 million to resolve a federal criminal investigation into a long-running bribery scheme that implicates Madigan. They say the company has admitted that from 2011 to 2019 it arranged for jobs and vendor subcontracts “for various associates of a high-level elected official for the state of Illinois."

“The speaker has a lot that he needs to answer for, to authorities, to investigators, and most importantly, to the people of Illinois,” Pritzker said during a stop in suburban Chicago. “If these allegations of wrongdoing by the speaker are true, there is no question that he will have betrayed the public trust and he must resign.”

U.S. Attorney John Lausch said at a news conference that the agreement with ComEd “speaks for itself.”

“It also speaks volumes about the nature of the very stubborn public corruption problem we have here in Illinois," he said.

Lausch wouldn't comment on the identity of Public Official A, saying his office doesn't identify people if they have not been charged. But he said the investigation is “vibrant” and will continue, and he asked for people with information to contact the FBI.

Former federal prosecutor Phil Turner, now a Chicago defense attorney, said it’s likely the government has pursued Madigan for years and with the ComEd allegations, found “something really solid” to reach him.

“To put it bluntly, they’re coming for him,” Turner said. "They’ll have some people who are very credible. With bribes, there’s a money trail, good documentation, and witness testimony corroborated by documents can make the case extremely strong.”

In the news release, prosecutors said Public Official A controlled what measures were called for a vote in the Illinois House of Representatives and exerted substantial influence over lawmakers concerning legislation affecting ComEd." During the time of the scheme, the Illinois Legislature considered legislation that affected the company's profitability, including regulatory processes used to determine rates the state's largest electric utility charged customers, they said.

The alleged bribery scheme was orchestrated “to influence and reward the official’s efforts to assist ComEd with respect to legislation concerning ComEd and its business," prosecutors said. That included arranging jobs and vendor contracts for Madigan allies and workers, including for people from his political operation, who performed little or no work, appointing a person to the company's board at Madigan's request and giving internships to students from his Chicago ward.

In October, Chicago radio station WBEZ reported that Anne Pramaggiore, CEO of ComEd parent company Exelon, had abruptly left her job as the company’s ties to a federal investigation seemed to be deepening. The Chicago Tribune reported in December that Madigan was the subject of inquiries in the corruption probe that had already entangled several top Illinois Democrats.

More than half a dozen Illinois Democrats — including some former Madigan confidants and allies — have been charged with crimes or had agents raid their offices and homes.

Madigan, 78, who came up under the political machine of the late Mayor Richard J. Daley and considered him a mentor, was elected to the House of Representatives in 1970. He took over as speaker in 1983 and has held the gavel for all but two years since, building a reputation for canny strategizing, patience and outwitting his political rivals. In 2017 he bested the 32 ½-year record held by a midcentury South Carolina Democrat to become the nation’s longest-serving state House speaker.

Madigan also controls four campaign funds and millions in contributions, allowing him to wield considerable power at the ballot box as well as the state Capitol. But Possley said he has done nothing improper.

“The Speaker has never helped someone find a job with the expectation that the person would not be asked to perform work by their employer, nor did he ever expect to provide anything to a prospective employer if it should choose to hire a person he recommended," she said in the statement. “He has never made a legislative decision with improper motives and has engaged in no wrongdoing here. Any claim to the contrary is unfounded.”

The Chicago Sun-Times reported that the subpoenas issued Friday sought records from Madigan's office regarding AT&T Services Inc, Walgreens and Rush University Medical Center, as well as records including several Madigan political operatives. The newspaper, which obtained a copy of the subpeona, said the operatives included one current and two former Chicago aldermen, as well as close Madigan ally Michael McClain, a former state lawmaker-turned-lobbyist.

The ComEd investigation, which charges the company with one count of bribery, is the latest public corruption probe in a state where four of the last 11 governors have been sent to prison and several state lawmakers and Chicago City Council members have faced charges, been convicted, or cooperated with law enforcement investigations.

“Even for a state with a history of corruption, this is unprecedented,” Illinois Republican Party Chairman Tim Schneider said.

Under the deferred prosecution agreement, which still must be approved by a judge, the government will defer prosecution on the charge for three years and then seek to dismiss it if the utility “abides by certain conditions, including continuing to cooperate with ongoing investigations of individuals or other entities related to the conduct described in the bribery charge."

Lausch said that ComEd has provided “substantial” cooperation in the investigation. Under the terms of its agreement the company will continue to cooperate until all investigations and prosecutions are complete.

Exelon CEO Christopher Crane said the company “acted swiftly to investigate” when it learned of inappropriate conduct and concluded “a small number of senior ComEd employees and outside contractors" who no longer work for the company orchestrated the misconduct.

“We apologize for the past conduct that didn’t live up to our own values, and we will ensure this cannot happen again," he said.