Reports that the Navy was considering shipbuilding cuts and accelerated retirements of ships came as a surprise to many last month. 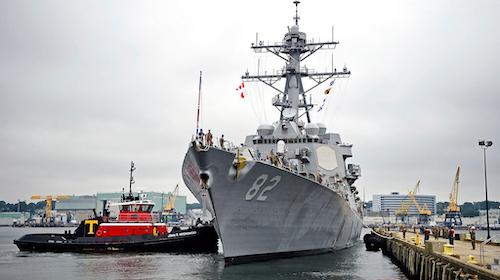 Democratic Rep. Joe Courtney, of Connecticut, and GOP Rep. Rob Wittman, of Virginia, both members of the seapower and projection forces subcommittee, visited the shipyard at the invitation of Democratic Reps. Chellie Pingree and Jared Golden, both of Maine.

The tour came several weeks after a memo was leaked that outlined an initial Navy proposal to cut shipbuilding.

One proposal would reduce the number of Arleigh Burke-class destroyers planned for construction from 12 to seven over the next five years. Those destroyers are produced at two shipyards, Maine's Bath Iron Works, a General Dynamics subsidiary, and Ingalls Shipbuilding in Mississippi.

Courtney and Wittman made it clear that they are strongly opposed to such a cut of shipbuilding, Golden said afterward.

“The Navy requested and Congress approved a multiyear procurement. This new proposal in the memo would nullify a contract that’s already agreed to. That’s pretty much unheard of,” said Golden, who is also a member of the seapower subcommittee.

Congress will have the final say, and shipbuilders should be heartened that there is bipartisan support in Congress for increasing the size of the fleet, not reducing it, he said.

Reports that the Navy was considering shipbuilding cuts and accelerated retirements of ships came as a surprise to many last month.