The plant employs about 300 people and is the main driver of the economy for the surrounding town of Colstrip, which has about 2,300 people. 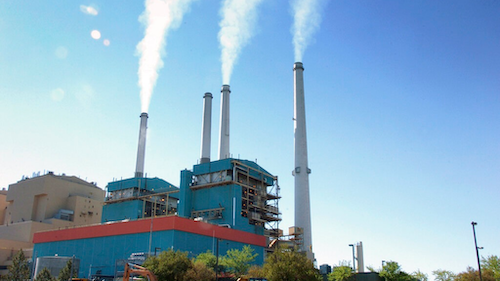 In this July 1, 2013, file photo, gas emissions rises from a coal-burning power plant in Colstrip, Mont. One of the largest coal-fired power plants in the western U.S. will close two of its four units by Saturday, Jan. 4, 2020, as the Montana facility edges toward an eventual total shutdown.
AP Photo/Matthew Brown, File

BILLINGS, Mont. (AP) — One of the largest coal-fired power plants in the western U.S. will close two of its four units in coming days as the Montana facility edges toward an eventual total shutdown.

Colstrip Units 1 and 2 — built in the 1970s when massive strip mines were being developed across Montana and Wyoming — will close by Jan. 5 or as soon as they run out of coal to burn, Talen Energy spokeswoman Taryne Williams said Thursday.

The plant employs about 300 people and is the main driver of the economy for the surrounding town of Colstrip, which has about 2,300 people. But it's been unable to compete with surging investments into renewable energy and cheap natural gas, as the coal plant's operating costs have risen with the need for better pollution controls.

Some employees for now will be re-assigned to decommissioning work that will last through mid-2020, Williams said. She said there are “no hard and fast numbers or timelines” as the company considers how many workers will be needed for the remaining two units.

The closure of Units 1 and 2 was long anticipated as demand for U.S. coal collapsed in recent years, and came despite vows by elected officials in Montana to find ways to keep it open.

The two closing units are operated by Pennsylvania-based Talen, which co-owns them with Puget Sound Energy of Washington state.

Sen. Duane Ankney, who represents Colstrip in the Montana Legislature, said the impending closure was a “prime example" of how out-of-state interests were hurting the coal industry to the detriment of Montana.

“Coal does so much more than power our homes. Coal funds our public schools, infrastructure, parks and libraries,” the Republican lawmaker said in a statement.

A representative of the International Brotherhood of Electrical Workers Local 1638, which represents most of the plant's union employees, could not be reached immediately for comment.

Williams said Talen was “committed to doing what is right by our employees”and will help affected workers to transition to a new job.

The doors to the two units are to be welded shut on Saturday, according to Ankney. But there are no plans to dismantle them because of their proximity to the two remaining units, Williams said.

The large volumes of ash generated by burning coal at Colstrip has contaminated underground water supplies with toxic materials and is expected to cost hundreds of millions of dollars to clean up. Plans for that cleanup are pending with the Montana Department of Environmental Quality.

Six utilities own shares of Colstrip's remaining two units built in the 1980s. Most of the owners are making preparations for operations to cease as early as 2025.

However, one of the owners, Northwestern Energy, plans for Colstrip to keep running past 2040 and announced in December that it wants to acquire part of Puget Sound Energy's interest in Colstrip Unit 4 for $1 .

That would boost South Dakota-based NorthWestern's ownership interest in the power plant to 55% even as many other utilities across the U.S. have been getting out of the coal power market in recent years.