Amazon Investors Side with ACLU on Facial Recognition

Some investors are urging the tech giant to not sell a powerful face recognition tool to police. 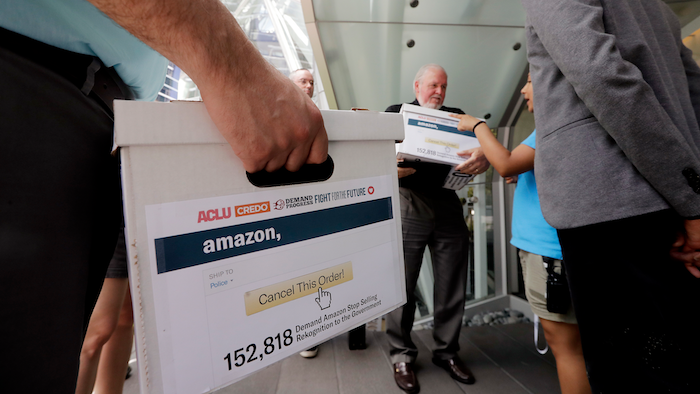 Faith leader the Rev. Paul Benz, center, and Shankar Narayan, legislative director of the ACLU of Washington, right, stand with others as they wait to deliver petitions at Amazon headquarters, Monday, June 18, 2018, in Seattle. Representatives of community-based organizations urged Amazon at a news conference to stop selling its face surveillance system, Rekognition, to the government. They later delivered the petitions to Amazon.
AP Photo/Elaine Thompson

SEATTLE (AP) — Some Amazon company investors said Monday they are siding with privacy and civil rights advocates who are urging the tech giant to not sell a powerful face recognition tool to police.

The American Civil Liberties Union is leading the effort against Amazon's Rekognition product, delivering a petition with 152,000 signatures to the company's Seattle headquarters Monday, telling the company to "cancel this order." They're asking Amazon to stop marketing Rekognition to government agencies over privacy issues that they say can be used to discriminate against minorities.

Amazon said it's an object detection tool. The company through a spokesman said it can be used for law enforcement tasks ranging from fighting human trafficking to finding lost children, and that just like computers, it can be a force for good in responsible hands.

But a group of 19 investment managing companies, including Harrington Investments, Inc. and Walden Asset Management, expressed concerns about the tool.

John Harrington, president and CEO of the California-based Harrington Investments, Inc., said the investors collectively manage about $10 billion in common voting stock among thousands of individual investors. They account for a small percent of shareholders, between 5 and 10 percent, for the online behemoth.

Harrington said there are concerns Rekognition could open the company up to lawsuits. In a letter last week, the companies told Amazon to stop expanding, developing and marketing it until it could demonstrate there was adequate fiduciary oversight. They also want Amazon to place appropriate guidelines and policies in place to protect citizens, customers and stakeholders.

"We don't know of any restrictions or parameters or policy decisions that Amazon made in going ahead and marketing this. We're concerned about some serious privacy right issues and also we're concerned this may be litigious," Harrington said.

It's not clear how many law enforcement agencies have purchased the tool since its launch in late 2016 or since its update last fall, when Amazon added capabilities that allow it to identify people in videos and follow their movements almost instantly.

Privacy advocates are worried that it could have potentially dire consequences for minorities who are already arrested at disproportionate rates, immigrants who may be in the country illegally or political protesters, they said.

On Monday, the advocates against the product cited the dangers of blanket police surveillance in front of Amazon's Spheres building. The demonstration happened steps away from where young tech workers sat eating lunch and lounged on giant bean bags in a courtyard.

Amazon previously noted that said some agencies have used the program to find abducted people, and amusement parks have used it to find lost children.