He had been assured that everything he did was appropriate. 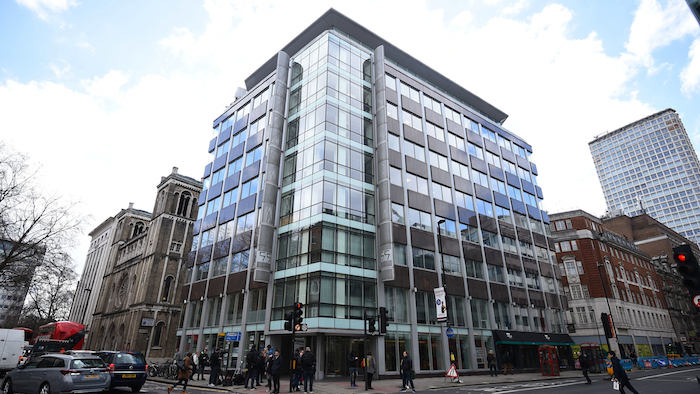 The offices of Cambridge Analytica (CA) in central London, after it was announced that Britain's information commissioner Elizabeth Denham is pursuing a warrant to search Cambridge Analytica's computer servers, Tuesday March 20, 2018. Denham said Tuesday that she is using all her legal powers to investigate Facebook and political campaign consultants Cambridge Analytica over the alleged misuse of millions of people's data. Cambridge Analytica said it is committed to helping the U.K. investigation.
Kirsty O'Connor/PA via AP

LONDON (AP) — An academic who developed an app used by Cambridge Analytica to harvest data from millions of Facebook users said Wednesday he had no idea his material would be used in Donald Trump's 2016 presidential campaign and that he's being scapegoated in the affair.

Alexandr Kogan, a psychology professor at Cambridge University, told the BBC that both Facebook and Cambridge Analytica have tried to place the blame on him for violating the social media platform's terms of service, when he had been assured that everything he did was appropriate.

Kogan told the BBC that Cambridge Analytica approached him about the app and, in retrospect, he should have asked the company more questions about how the data would be used.

Authorities in Britain and the United States are investigating the alleged improper use of the data. Billions have been wiped off Facebook's market value as its shares fall and consumers are asking questions about whether their privacy has been violated.

"My view is that I'm being basically used as a scapegoat by both Facebook and Cambridge Analytica," he said. "Honestly we thought we were acting perfectly appropriately, we thought we were doing something that was really normal."

The CEO of Cambridge Analytica, Alexander Nix, has been suspended after an investigation from Britain's Channel 4 News showed footage of him boasting of various unsavory services to an undercover reporter.

Nix said the firm handled "all the data, all the analytics, all the targeting" and said Cambridge Analytica used emails with a "self-destruct timer" to make its role more difficult to trace.

In a statement, Cambridge Analytica's board said Nix's comments "do not represent the values or operations of the firm and his suspension reflects the seriousness with which we view this violation."

Facebook also drew continued criticism for its alleged inaction to protect users' privacy. On Tuesday, the chairman of the U.K. parliamentary media committee, Damian Collins, said his group has repeatedly asked Facebook how it uses data. He said Facebook officials "have been misleading to the committee."

The committee summoned Facebook CEO Mark Zuckerberg to testify. Facebook sidestepped questions on whether Zuckerberg would appear, saying instead that it's currently focused on conducting its own reviews.

Denham said the prime allegation against Cambridge Analytica is that it acquired personal data in an unauthorized way, adding that the data provisions act requires services like Facebook to have strong safeguards against misuse of data.

Leading Democrats in the U.S. Senate also called on Zuckerberg to testify. Sen. Dianne Feinstein of California, the top Democrat on the Senate Judiciary Committee, called Facebook's latest privacy scandal a "danger signal." She wants Zuckerberg's assurances that Facebook is prepared to take the lead on security measures that protect people's privacy — or Congress may step in.

Kogan developed a personality survey called "This Is Your Digital Life." He said around 200,000 people were recruited to do the survey. Cambridge Analytica allegedly used the material to reach out to many others beyond those in the survey by pulling in data from "friends" of those recruited. He said 30 million profiles were garnered, some 20 million fewer than has been widely reported.

"One of the great mistakes I did here was I just didn't ask enough questions," he said. "I had never done a commercial project, I didn't really have any reason to doubt their sincerity. That's certainly something I strongly regret now."

He said the firm paid some $800,000 for the work, but it went to participants in the survey.

"My motivation was to get a dataset I could do research on; I have never profited from this in any way personally," he said.