Virtual Reality to Launch Without Fanfare

The head-mounted display can transport you to virtual worlds without the nausea-inducing side effects that plagued VR inventions in the 1990s. 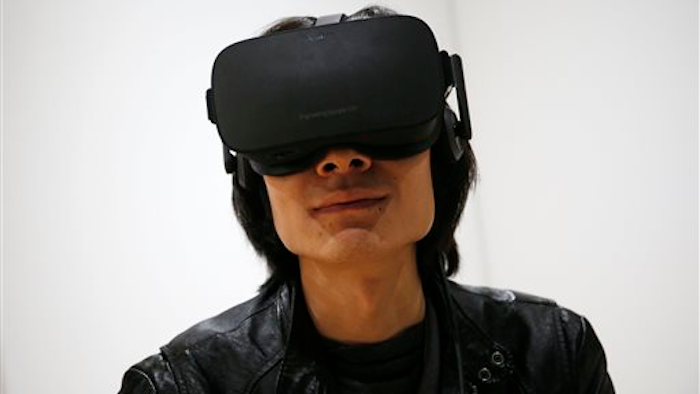 In this Jan. 6, 2016 file photo, Peijun Guo wears the Oculus Rift VR headset at the Oculus booth at CES International in Las Vegas. The consumer version of the Oculus Rift will arrive for early adopters on Monday, March 28, 2016, kicking off a new wave of high fidelity virtual reality available for people’s homes.
AP Photo/John Locher, File

When the Oculus Rift debuts next week, it won't do so with a star-studded launch party or massive marketing blitz worthy of a new video game console or smartphone.

Instead, thousands of the virtual reality doodads will simply arrive on the door steps of early adopters willing to spend $600 for the immersive technology.

Oculus' founder Palmer Luckey kick-started interest in modern-day VR four years ago with the introduction of a clunky headset he crafted from smartphone parts.

The gizmo has evolved into a head-mounted display capable of transporting wearers to virtual worlds, without the same level of nausea-inducing side effects that plagued VR inventions in the 1990s.

After being acquired by Facebook for $2 billion in 2014 and releasing several experimental versions of the Rift for developers, Oculus' first consumer headset debuts Monday, although the first wave has already sold out and new orders won't arrive until this summer.

The sky-high expectations and hype for high-fidelity VR have lowered in recent months, mostly because of the limited supply of headsets and consumers who own PCs fast enough to run them. There are also lingering concerns about the potential for VR motion sickness and other health issues.

"It's not going to be everyone in the whole world using virtual reality — or even gamers using virtual reality," Luckey said at last week's Game Developers Conference. "There is going to be an adoption curve over time, starting with early adopters or PC gamers who either own or are willing to buy a high-end PC. In that sense, it is part of a multi-year process."

Oculus hasn't said how many headsets it's sold since the consumer version first went on sale in January. Luckey noted that the Rift, which requires a PC costing at least $1,000 to operate, isn't being distributed to members of the media for review in order to fulfill more orders from customers.

The head-tracking headset will come with an Xbox One controller and several games but won't be bundled with the Oculus Touch controllers, which can recreate the sensation of hands in VR. The motion-detecting controllers will be available separately later this year for an undisclosed price.

Luckey expects the system's life span to be "somewhere between a phone and a console." He anticipates the technology will one day evolve to feel more like a pair of sunglasses than ski goggles.

The Rift's launch will be closely followed by the debut of the HTC Vive, a more dynamic — and expensive — headset that comes bundled with a pair of wand-like controllers and sensors that enable standing VR experiences. The Vive will launch April 5 and cost $800. Sony will also enter the VR space in October with PlayStation VR, a $400 head-mounted display that works in tandem with the PlayStation 4 console, not a PC.

Jesse Schell, creator of such VR games as "I Expect You to Die," recently predicted that about 8 million headsets would be sold by 2017.

"This isn't some fad," Schell said during his "40 Predictions for VR/AR Through 2025" presentation at GDC. "It's going to stay."

"I called every one of the major hardware guys and told them to rename their launch to beta," Riccitiello said. "I told them to be careful. I'm a little older than most of these CEOs. I would hate to see our industry have to do a recovery year. It's going to have a spectacular year. It's just not going to be as big as what the analysts have said."

While the past four years have seemingly been building to Monday's release of the Oculus Rift, most VR evangelists agree that VR will be a tortoise, not a hare, if it wins the latest technology race.

"It'll be bigger next year, and the year after that it'll be even bigger," Riccitiello said. "I think by 2019, it'll feel like an industry."