Toyota's luxury brand Lexus is trying to shake off its stodgy image. So it's opening a cafe. 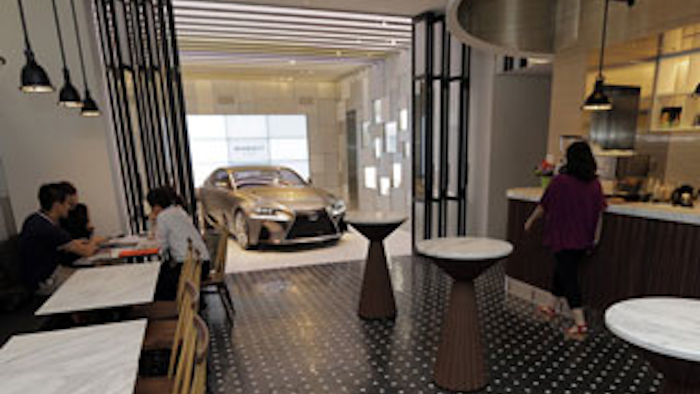 TOKYO (AP) -- Toyota's luxury brand Lexus is trying to shake off its stodgy image. So it's opening a cafe.

The special lounges, the first of which is opening next week in Tokyo's fashionable Aoyama district, are designed to look more like a chic home than a standard showroom. In fact, only one vehicle can be displayed at a time.

What Toyota Motor Corp. is calling a "luxury-brand experience space" is mostly given over to serving espresso and displaying cool curiosities: a pair of old Ray Ban sunglasses here, a Jack Kerouac book there. The bathroom interior is wrapped in a huge glass case packed with miniature cars. Similar spaces are set to open in New York and Dubai, as the brand tries to underline recent redesigns of some of its top models.

"This is about showing people the personality of the Lexus brand, and showing a more emotional part of Lexus," Mark Templin, Executive Vice President of Lexus International, said Friday during a preview tour.

The Lexus has scored success since it arrived in North America 24 years ago by offering reliability and craftsmanship, longtime trademarks of Toyota, the world's top automaker.

These days, that success is not a selling point for younger consumers, who identify the Lexus with the staid conservative image of their parents' generation.

Templin says the new space, called Intersect, is out to change all that, welcoming the shabbiest dressed teen who happens to walk in.

The lounges, a creation of interior designer Masamichi Katayama, will also hold events for designers and offer music, food and fashion, aiming to send a message about a cool lifestyle, instead of just the nuts-and-bolts of products, he said.

Lexus debuted in Japan in 2005, much later than in the U.S. Until the arrival of the Lexus, the Japanese luxury market was dominated by imports such as Mercedes and BMW.

Lexus has outsold both Mercedes and BMW here in recent years, according to researcher IHS Automotive. Last year, Lexus sales totaled 43,752 cars in Japan, beating BMW at 40,916 and Mercedes-Benz at 40,341.

In contrast, Lexus has been fumbling lately in the U.S., falling behind Mercedes and BMW for the last two years.

Koji Endo, auto analyst at Advanced Research Japan Co. in Tokyo, said that grabbing share in the luxury market is difficult because brand loyalty is strong for luxury nameplates like BMW.

Toyota officials say that has been gradually changing. They also believe the market domination that Toyota has in Japan is a plus. As younger Toyota drivers grow older, they may opt for a Lexus, they say.

But the big problem may be that many young Japanese don't have the money to buy any car, let alone a luxury car. Public transportation is so sophisticated in most Japanese cities, people can get around fine without a car, which come with relatively high tax, inspection and parking fees.

The trend among youngsters to shun car ownership has grown so widespread a special term was coined: "kuruma banare," meaning "leaving cars."