An inventor of direct air capture technology shows how it works. 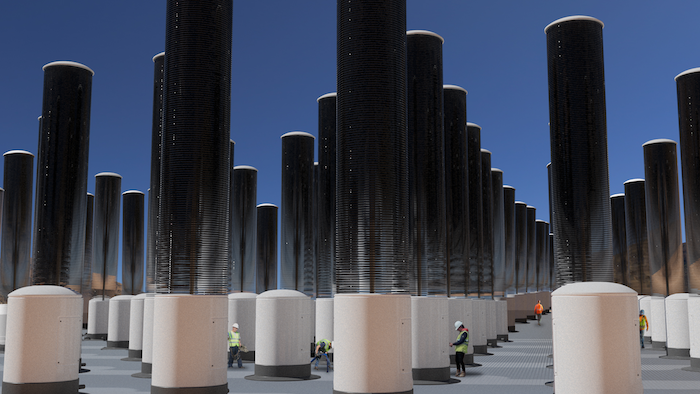 One ‘mechanical tree’ is about 1,000 times faster at removing carbon dioxide from air than a natural tree. The first is to start operating in Arizona in 2022.
Illustration via Arizona State University

Two centuries of burning fossil fuels has put more carbon dioxide, a powerful greenhouse gas, into the atmosphere than nature can remove. As that CO2 builds up, it traps excess heat near Earth’s surface, causing global warming. There is so much CO2 in the atmosphere now that most scenarios show ending emissions alone won’t be enough to stabilize the climate – humanity will also have to remove CO2 from the air.

The U.S. Department of Energy has a new goal to scale up direct air capture, a technology that uses chemical reactions to capture CO2 from air. While federal funding for carbon capture often draws criticism because some people see it as an excuse for fossil fuel use to continue, carbon removal in some form will likely still be necessary, IPCC reports show. Technology to remove carbon mechanically is in development and operating at a very small scale, in part because current methods are prohibitively expensive and energy intensive. But new techniques are being tested this year that could help lower the energy demand and cost.

We asked Arizona State University Professor Klaus Lackner, a pioneer in direct air capture and carbon storage, about the state of the technology and where it’s headed.

What is direct carbon removal and why is it considered necessary?

When I got interested in carbon management in the early 1990s, what drove me was the observation that carbon piles up in the environment. It takes nature thousands of years to remove that CO2, and we’re on a trajectory toward much higher CO2 concentrations, well beyond anything humans have experienced.

Humanity can’t afford to have increasing amounts of excess carbon floating around in the environment, so we have to get it back out.

Not all emissions are from large sources, like power plants or factories, where we can capture CO2 as it comes out. So we need to deal with the other half of emissions – from cars, planes, taking a hot shower while your gas furnace is putting out CO2. That means pulling CO2 out of the air.

Since CO2 mixes quickly in the air, it doesn’t matter where in the world the CO2 is removed – the removal has the same impact. So we can place direct air capture technology right where we plan to use or store the CO2.

The method of storage is also important. Storing CO2 for just 60 years or 100 years isn’t good enough. If 100 years from now all that carbon is back in the environment, all we did was take care of ourselves, and our grandkids have to figure it out again. In the meantime, the world’s energy consumption is growing at about 2% per year.

One of the complaints about direct air capture, in addition to the cost, is that it’s energy intensive. Can that energy use be reduced?

Two large energy uses in direct air capture are running fans to draw in air and then heating to extract the CO2. There are ways to reduce energy demand for both.

For example, we stumbled into a material that attracts CO2 when it’s dry and releases it when wet. We realized we could expose that material to wind and it would load up with CO2. Then we could make it wet and it would release the CO2 in a way that requires far less energy than other systems. Adding heat created from renewable energy raises the CO2 pressure even higher, so we have a CO2 gas mixed with water vapor from which we can collect pure CO2. 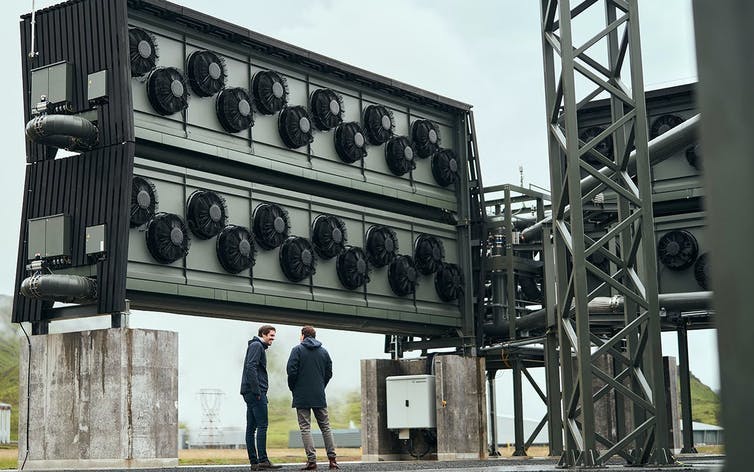 Climeworks, a Swiss company, has 15 plants removing carbon dioxide from the air.Climeworks

We can save even more energy if the capture is passive – it isn’t necessary to have fans blowing the air around; the air moves on its own.

My lab is creating a method to do this, called mechanical trees. They’re tall vertical columns of discs coated with a chemical resin, about 5 feet in diameter, with the discs about 2 inches apart, like a stack of records. As the air blows through, the surfaces of the discs absorb CO2. After 20 minutes or so, the discs are full, and they sink into a barrel below. We send in water and steam to release the CO2 into a closed environment, and now we have a low-pressure mixture of water vapor and CO2. We can recover most of the heat that went into heating up the box, so the amount of energy needed for heating is quite small.

By using moisture, we can avoid about half the energy consumption and use renewable energy for the rest. This does require water and dry air, so it won’t be ideal everywhere, but there are also other methods.

Can CO2 be safely stored long term, and is there enough of that type of storage?

I started working on the concept of mineral sequestration in the 1990s, leading a group at Los Alamos. The world can actually put CO2 away permanently by taking advantage of the fact that it’s an acid and certain rocks are base. When CO2 reacts with minerals that are rich in calcium, it forms solid carbonates. By mineralizing the CO2 like this, we can store a nearly unlimited amount of carbon permanently.

For example, there’s lots of basalt – volcanic rock – in Iceland that reacts with CO2 and turns it into solid carbonates within a few months. Iceland could sell certificates of carbon sequestration to the rest of the world because it puts CO2 away for the rest of the world.

There are also huge underground reservoirs from oil production in the Permian Basin in Texas. There are large saline aquifers. In the North Sea, a kilometer below the ocean floor, the energy company Equinor has been capturing CO2 from a gas processing plant and storing a million tons of CO2 a year since 1996, avoiding Norway’s tax on CO2 releases. The amount of underground storage where we can do mineral sequestration is far larger than we will ever need for CO2. The question is how much can be converted into proven reserve. 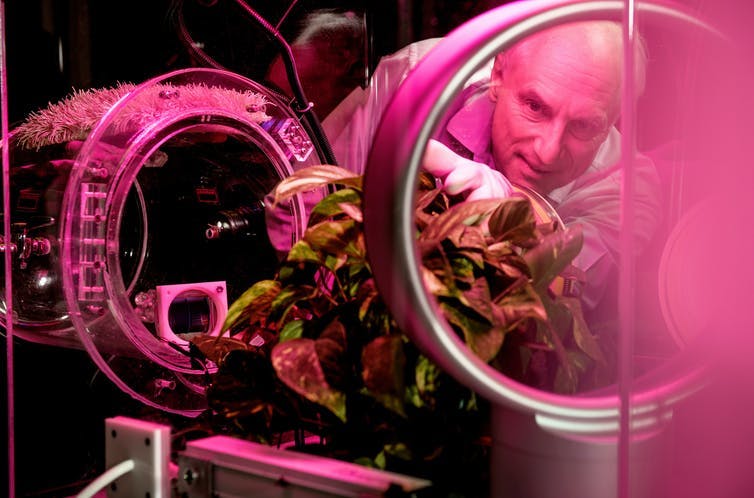 We can also use direct air capture to close the carbon loop – meaning CO2 is reused, captured and reused again to avoid producing more. Right now, people use carbon from fossil fuels to extract energy. You can convert CO2 to synthetic fuels – gasoline, diesel or kerosene – that have no carbon in them by mixing the CO2 with green hydrogen created with renewable energy. That fuel can easily ship through existing pipelines and be stored for years, so you can produce heat and electricity in Boston on a winter night using energy that was collected as sunshine in West Texas last summer. A tankful of “synfuel” doesn’t cost much, and it’s more cost-effective than a battery.

The Department of Energy set a new goal to slash the costs of carbon dioxide removal to US$100 per ton and quickly scale it up within a decade. What has to happen to make that a reality?

DOE is scaring me because they make it sound like the technology is already ready. After neglecting the technology for 30 years, we can’t just say there are companies who know how to do it and all we have to do is push it along. We have to assume this is a nascent technology.

Climeworks is the largest company doing direct capture commercially, and it sells CO2 at around $500 to $1,000 per ton. That’s too expensive. On the other hand, at $50 per ton, the world could do it. I think we can get there.

The U.S. consumes about 7 million tons of CO2 a year in merchant CO2 – think fizzy drinks, fire extinguishers, grain silos use it to control grain powder, which is an explosion hazard. The average price is $60-$150. So below $100 you have a market.

What you really need is a regulatory framework that says we demand CO2 is put away, and then the market will move from capturing kilotons of CO2 today to capturing gigatons of CO2.

Where do you see this technology going in 10 years?

I see a world that abandons fossil fuels, probably gradually, but has a mandate to capture and store all the CO2 long term.

Our recommendation is when carbon comes out of the ground, it should be matched with an equal removal. If you produce 1 ton of carbon associated with coal, oil or gas, you need to put 1 ton away. It doesn’t have to be the same ton, but there has to be a certificate of sequestration that assures it has been put away, and it has to last more than 100 years. If all carbon is certified from the moment it comes out of the ground, it’s harder to cheat the system.

A big unknown is how hard industry and society will push to become carbon neutral. It’s encouraging to see companies like Microsoft and Stripe buying carbon credits and certificates to remove CO2 and willing to pay fairly high prices.

New technology can take a decade or two to penetrate, but if the economic pull is there, things can go fast. The first commercial jet was available in 1951. By 1965 they were ubiquitous.

This article is republished from The Conversation under a Creative Commons license. Read the original article here: https://theconversation.com/these-machines-scrub-greenhouse-gases-from-the-air-an-inventor-of-direct-air-capture-technology-shows-how-it-works-172306.